1 2015 Mitsuoka Himiko Is the Strangest Coupe Cabrio in Japan

Fancy an old icon of the industry of hauling for your private collection? We probably found what you need as this rare Ford F600 wants to find a new home for under 20 thousand bucks.
10 photos

The Ford F series had a whole bunch of models along time, but I think neither looks as cool as the second generation, with all those round shapes, wide fenders and that unmistakeable front end.

For those new to the auto industry, the aforementioned pickup truck also gave birth to one of the coolest trucks in the industry - the F600 cab over engine model. One is for sale at World Wide Vintage Autos and it's priced at only $19,000.

This 1955 F600, chassis no C60Z5E26168, has been completely restored from bumper to bumper and everything is said to be working fine, including the heater. The cab is painted in glossy black, while the custom wood stake flat bed is pure eye-candy in red and fine striping.

Under the bulbed hood, you’ll get a 292 V8 engine which is also rebuilt and said to be working fine. It is mated to a four speed stick shift and you also have two speeds on the rear differential, which means you basically have an 8-gear transmission. Suddenly that 7-speed manual Porsche 911 nowadays doesn’t seem that modern, right?

As we were saying, the seller wants at least $19,000 to part with it and it also mentions that if you’re interested you should go first and see the truck in flesh and bone on their lot before bidding or making a deposit. 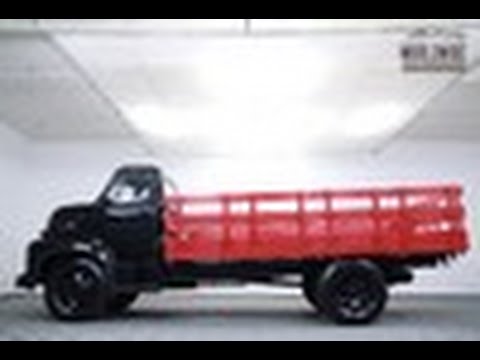