2 Cars Get Facial Expressions in Hilarious Sketches, From Happy Ferraris to Angry GT-R

Vlad Mitrache
Do you know why so many people love the Nissan GT-R? Because, in many respects, it is absolutely ridiculous. And so is the clip you can find below featuring one.
1 photo
There are several ways you can clear a field of snow, but I’m willing to bet all of them are more boring than the one employed by this guy over here - plowing with the side of your car and melting it with the flames coming out of your exhausts. He’s proving once again why having four-wheel-drive on a sports car only means more fun opportunities throughout the year.

He manages to combine everything that’s festive about winter into one regrettably short clip containing snow, donuts and firecrackers. Put a Christmas Carol in the background and you’ll start to believe it’s December 24 and panic you didn’t buy any presents yet.

These guys even found the time - and a contender courageous enough to go against the Nissan GT-R - for a drag race, the perfect occasion for the Japanese car to employ its launch control feature. It’s safe to say that whoever created this function didn’t think it was going to be used on snow, so the result is underwhelming, but no less spectacular. Mostly due to the amount of snow flying around.

Actually, snow flying around is a bit of a leitmotif in this video, with the guy holding the camera (great job, by the way, considering it couldn’t have been too warm there) finding this out the hard way at the beginning of the video.

For comparison, there’s what looks like a BMW M5 E39 at the end, and it looks like a tamed version of what we’ve just seen so far - as if it’s moving in slow-motion or something. It’s also black and pretty extreme, but its rear-wheel-drive means it can’t move as nimbly through the snow from one donut to the other as the GT-R can. 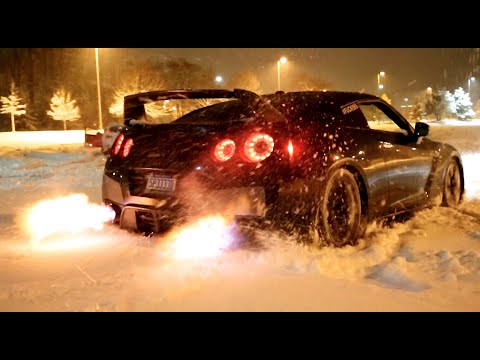