Gabriel Nica
You guys told us that drag races between a stock car and a tuned one will never be fair. While we did provide various videos showing instances where the tuning part would be justified, we do agree to a certain degree.
1 photo
How about stock cars then? Is it fair to pit two cars against each other if the specs on paper tell you from the get-go who’s going to win it? You probably wouldn’t pit a Dacia Duster against a Nissan GT-R, right? Well, let’s stay away from such disparate examples and see what we could throw at Godzilla to remain competitive.

How about a Ferrari F430 Scuderia? Will that do? Well, at first sight, it may be down on power and torque, right? The specs say that the Scuderia, which is a more hardcore version of the regular 430, is a bit lighter and more track ready. In terms of straight line performance, things were improved just a little in the horsepower department.

No matter if we’re talking about the special version of the regular one, the Ferrari used a 4.3-liter V8 that revved into oblivion. The standard F430 had about 490 HP at its disposal while the Scuderia raised the ante to 510 HP and 470 Nm (347 lb-ft) of torque. The 0-100 km/h (62 mph) spring was also improved by some 0.7 seconds thanks to a couple of well thought out changes.

As for the Nissan here, what hasn’t been said already? The supercar that made all other supercars tremble in fear is now making 550 HP out of its 3.8-liter V6 twin-turbo engine and the launch control feature only got better, getting it up to 100 km/h (62 mph) in just 2.8 seconds. Compared to the Ferrari’s 3.3, that’s a considerable difference.

And yet, the get-up-and-go advantage of Nissan’s transmission was rendered null once the two drivers decided to let their cars run from a rolling start. The outcome is a lot closer than we imagined, despite the GT-R’s superior specs. Check it out! 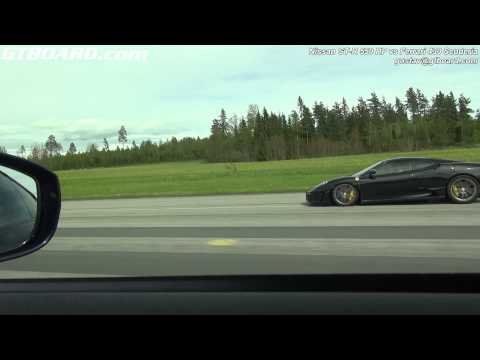