3 BMW Shows i Inside Future at 2017 CES, Packs HoloActive Interface

5 BMW Designworks Made A Puma Shoe Inspired By The GINA Concept, Will Be In Stores
Coverstory

Nissan GT-R "Competition" Could Be the Best R35 Widebody Rendering

Home > News > Renderings
Mihnea Radu
There must be hundreds of amazing, expensive GT-R builds out there, if not thousands. Likewise, Pinterest is filled with crazy widebody renderings. Up until this point, I believed the best one was probably authored by Khyzyl Saleem, but YouTuber Hycade's work also demands to be seen.
18 photos

The R35 Nissan GT-R is one of the oldest sports vehicles ever, and to most people, that's a bad thing. You need to add something crazy in order to stand out, but this rendering does the reverse. It's streamlined but muscular, like an ultimate version of the car.

There are two real-world parallels we can draw here. One is the Liberty Walk Silhouette line of body kits. Inspired by an old Japanese race car series, they offer streamlined, simple fender flares that take supercars to the next level. There is one for the GT-R, of course, but it isn't nearly as good.

No, we find that Hycade's work always looks like a cross between Khyzyl Saleem's old style of neon-colored cyberpunk 2D art and Audi's design language. The GT-R's big fenders aren't like a body kit; they're designed the same way as the RS6.

At the front, the 3D model is trying to put on its best supercar impersonation with a hood that channels air like a race car and large vents to cool the brakes. The side skirts and rear diffuser are aligned with how Nismo does things but a bit larger. Meanwhile, the rear might be inspired by BMW.

See the way the shoulders are massively wide and rise into the tall wing? Well, that's what the 3.0 CSL Hommage R was like. Also, the overall proportions are similar to the stubby M2. The German connection is why we dubbed this the GT-R "Competition." After all, every superhero needs a cool name. 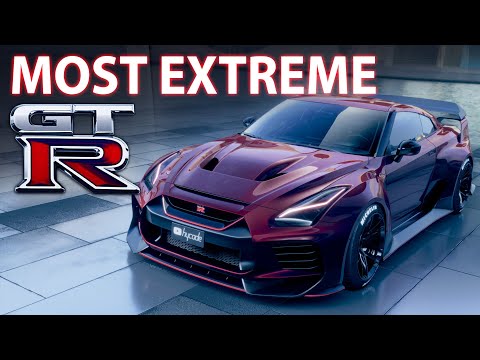