3 Porsche Boxster S Slips into Something Loud from Akrapovic

Mihnea Radu
So what can you expect to get if you're willing to pay about 50% more for something? McDonald's might give you a drink and fries with your burger, while Porsche will swap out your Boxster sports car for the Carrera 4S version of the new 911.
4 photos

Of course, we all know what happens if you were to drag race these two, but Carwow decided to put together this kind of lopsided competition between two Porsche brothers.

The cheaper car may already be familiar to you if you're a fan of their videos. It's the 718 Boxster GTS, which means a sportier setup than a Carrera S plus a 2.5-liter turbo engine with slightly more power: 365 HP and 430 Nm to be precise.

Tall dark and yellow by its side is the 911 Carrera 4S, which is the first version of the new series to be launched. Like its predecessor, the 2+2 coupe has a bi-turbo 3-liter Boxster engine, so two more cylinders than a Boxster and an output of 450 HP and 530 Nm. That might not sound like much, but we all know Porsche makes some of the fastest machines in the world, plus it comes with AWD which the smaller models never offer.

Everything is stacked up against the Boxster, so its driver uses a barely-legal start to get ahead off the line. After that, the 911 shows its how dominant its power is and wins the race, though not by as much as you'd think. Clearly, these smaller four-cylinder engines are better than people give them credit for.

The rolling race proves even more decisive for the expensive but sexy new 911, as it uses its 100 Nm advantage to pull away cleanly. Finally, we have the brake test, won by the heavier car with the bigger rotors. So at the end of the day, the GTS wins nothing at all, though we'd imagine the Cayman would have stood a better chance. 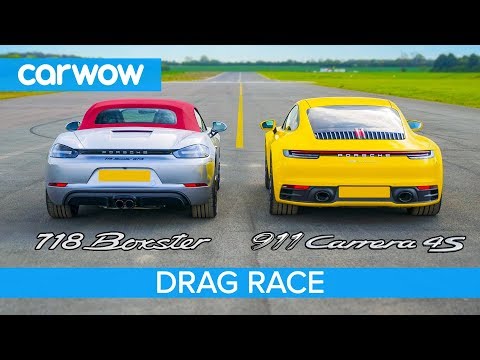