2 Oort Cloud Comet Heading This Way, Someone Imagined It Impacting the Moon

5 Elephants Don’t Really Mix With Rockets. Still, Here’s How Many Would Fit in One
Car video reviews:
Up Next

To Hellcat and Back – Most Powerful SUV, Dodge Durango SRT Hellcat, Returns in 2023

Never-Made British Airbreathing Spaceplane Would Have Been a Blast, Animation Proves

Despite many countries on this planet running their own space programs, when one thinks of space exploration they immediately think about NASA. Then, the list reads Roscosmos, ESA, JAXA, and in more recent times, CNSA. But how many of you have heard about UKSA?
14 photos

UKSA stands for the UK Space Agency, and it’s among the youngest of the bunch, having officially formed in 2010. Before that, the island had little in the way of a space program to show for.

Things would have been different, perhaps, if at least one of the several space vehicle ideas born in Britain would have become real. Ideas like the strangely named HOTOL (short for Horizontal Take-Off and Landing), an airbreathing single-stage-to-orbit spaceplane imagined back in the 1980s.

Back then, Rolls-Royce and British Aerospace decided to join the train leaving Earth’s orbit with the HOTOL. It was envisioned as a reusable space vehicle, shaped not unlike a rocket with two tiny wings at the back, that could lift-off horizontally from a runway.

The thing, powered by an airbreathing jet engine, would move under its own power on top of a rolling launch pad, which would be left behind, and the HOTOL would climb into orbit, to do its thing. Once the job ready, it would come down back again, not unlike the American space shuttle, and land on a runway.

None of the parties working in space exploration back then expressed much interest in the HOTOL, so the project was eventually scrapped, with some ideas imagined for it going into the Reaction Engines Skylon, another never-made British vehicle.

So, HOTOL never got to fly in the real world, but modern technology can easily bring it back to life and, for all intents and purposes, that’s what animation specialist Hazegrayart did, so you can now experience the HOTOL in action in the virtual realm. Video below. 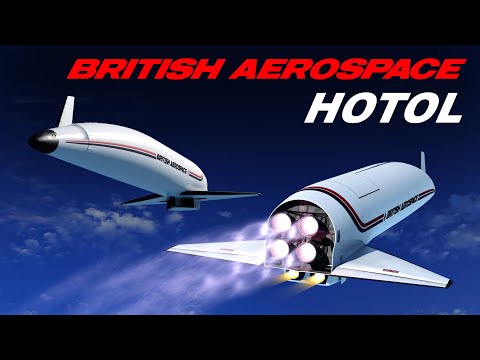