1 Oort Cloud Comet Heading This Way, Someone Imagined It Impacting the Moon

4 Elephants Don’t Really Mix With Rockets. Still, Here’s How Many Would Fit in One

Animation specialist Hazegrayart treats the world to short videos of rockets in action. Most of the time, we get to see concepts from the early days of space exploration, ideas that never got a chance to fly, being animated into existence and uploaded to YouTube. It’s a similar video that brings us here today, but one that does not show a concept from the past, and gives us a glimpse into the future instead.
10 photos

For a few years now, humanity has gotten itself used to seeing orbital rockets coming down to land, only to be used again. Reusable is how we now call them and, put in the news by Elon Musk’s SpaceX, are now expanding at an accelerated pace and will most definitely define the future.

One company working on a reusable rocket is called Rocket Lab. We’ve talked about it before here on autoevolution, seeing how the crew, established 16 years ago, is a very active one and already has two rockets in the works: Electron and Neutron.

Neutron, expected to take its first flight in 2024, is described as the perfect tool for “mega constellation deployment, deep space missions, and human spaceflight.” Both the first stage and the fairing are fully reusable.

The rocket can do this thanks to seven engines called Archimedes, capable of pushing a combined 1,300,000 lbf of thrust.

Rocket Lab plans to launch the Neutron from the NASA Wallops Flight Facility and Mid-Atlantic Regional Spaceport. There’s quite some time left until that time, but here is the Neutron in action in an unofficial animation by Hazegrayart, in case you needed to feast your eyes on something other than Falcon 9s and Starships. 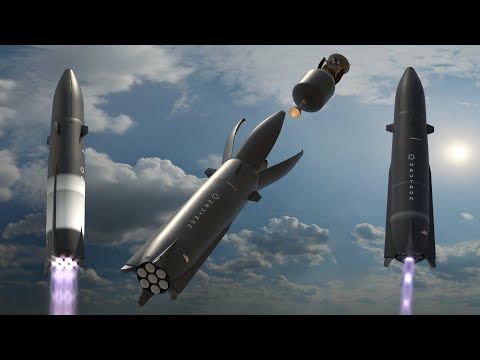