1 Neptune Is a Ghost in Breathtaking Webb Telescope Photo, Complete with Rings and Moons

2 We Just Received a Message From Voyager 1, the Space Probe Outside Our Solar System

4 Oort Cloud Comet Heading This Way, Someone Imagined It Impacting the Moon

Back in December 2021, after many, many years of hard work, postponements and general waiting, and after some $10 billion spent on it, the James Webb Space Telescope (JWST) finally departed our planet, and headed toward its work place located about one million miles (1.5 million km) away from home.

In the short time it has been fully functional, Webb proved all the challenges faced and all the dollars spent to make it have been worthwhile. Sure, for now (at the time of writing, at least), it only sent back some very cool-looking photos and is yet to make a notable discovery. But those will surely come in time, as the thing's goals are nothing short of grandiose.

With Webb now firmly locked in place at the second Lagrange point of our solar system, NASA has already turned its attention to the next telescope project, one that should be even more impressive than Webb. Called, for now, SPHEREx, it is supposed to provide us with a dramatically different approach at studying the Universe and unraveling its secrets.

SPHEREx is an abbreviation, of course, and it stands for Spectro-Photometer for the History of the Universe, Epoch of Reionization and Ices Explorer (hard to read and understand in just one go, I know). Unlike traditional telescopes (including Webb), which focus on one cosmic target at a time with all the power of their instruments, this one will take in large portions of the sky at once, and over short periods of time.

Doing so would allow the telescope (NASA calls it observatory) to scan 99 percent of the sky every six months. To get a sense of what that means, consider that in the span of three decades, another famous telescope, Hubble, managed to look at just 0.1 percent of the sky. Again, SPHEREx should cover almost all of it, twice a year!

Such a capability comes with some costs, though, as SPHEREx will not be capable of such high-detail shots as other pieces of hardware that looked at the skies over the years. It will, however, be capable of looking so far out and back into our Universe’s expanse and past that things that happened in the first second after the Big Bang should be laid bare, for us to stare at. Even more, the telescope should give us a glimpse into the formation and evolution of galaxies, but also provide intel on the “prevalence of molecules critical to the formation of life, like water locked away as ice in our galaxy.”

The instrument will do all of the above by using an 8-inch primary mirror. That's tiny as, for contrast, Webb’s is much larger, measuring 21.3 feet/6.5 meters. SPHEREx will protect itself from the light coming from the Sun (a real obstacle for successful space observations of any kind) using a 10.5 feet (3.2 meters) sunshield - again, for the sake of comparison, Webb has a shield the size of a tennis court.

SPHEREx will look at the Universe in infrared and employ spectroscopy to break that down into its individual colors. That’s exactly what Webb is doing right now.

NASA has a targeted launch year for this telescope set for 2025, but as we’ve learned (the hard way) with other important space projects and ideas, that’s subject to a lot of things.

Back in March 2022, the American space agency approved final plans for all the components that’ll go into the telescope, but also gave the thumbs up for the design of the spacecraft. The project is now on the verge of moving from the virtual realm, where it was designed, into the real world. 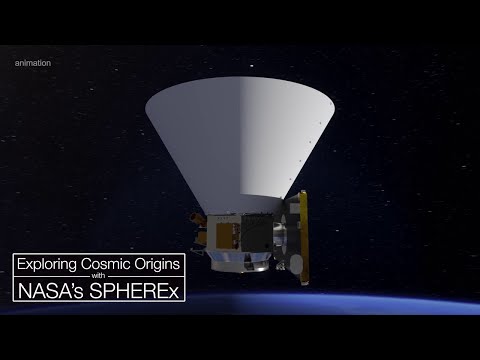