4 Yamaha VMAX Gets Sexed Up by Hermes

Some bikes and, for what's worth - the fun of riding them, are meant to be shared, while others have been created for a more egotistic purpose: that of solo riding. And I'm not thinking about big adventure bikes or cross motorcycles - this week is muscle bikes' turn.
More commonly known as the power cruisers, but bearing the fancier “muscle bike” tag, these bikes pack the essence of the motorcycling dream: killer looks, comfy riding and brutal, seemingly unlimited power. Built for those riders who can tame them, these beasts usually make absolutely no compromise in terms of performance and are definitely not for the inexperienced or the faint-hearted.

While it's really hard to make an all-time favorite list with all the power cruisers which have generated wild passion and undying addiction, this week's editorial focuses on three models, with the promise to add more to this hall of fame in the future.

I've added the Ducati Diavel, Yamaha's VMAX and the Triumph Rocket III to this week's “muscle bike trinity”, with a completely random presentation order, as ranking them is most likely impossible. With each of these three motorcycles boasting its own style and assets, it's very hard to have a “contest”, no matter which criteria would be agreed upon.

Let's start with the Ducati, especially as I've had a very nice and thrilling hands-on experience with this bike. The 2011 Diavel comes in three “flavors” but the differences are rather minute; the Carbon version is fully-loaded with carbon fiber elements and this makes it look absolutely fantastic, no matter whether you have the red or the black model in mind, while at the same time making the beast lighter.

The frame of the Diavel is the classic Ducati tubular steel structure with a diecast aluminium “subframe” and a composite rear section, making it the sportiest of the three. The Ducati designers have done a remarkable job putting together an awesome piece of machinery while retaining the classic Ducati trademarks; even more, thanks to some of the elements borrowed from the superbike world, the Diavel can do things other power cruisers can only dream about. 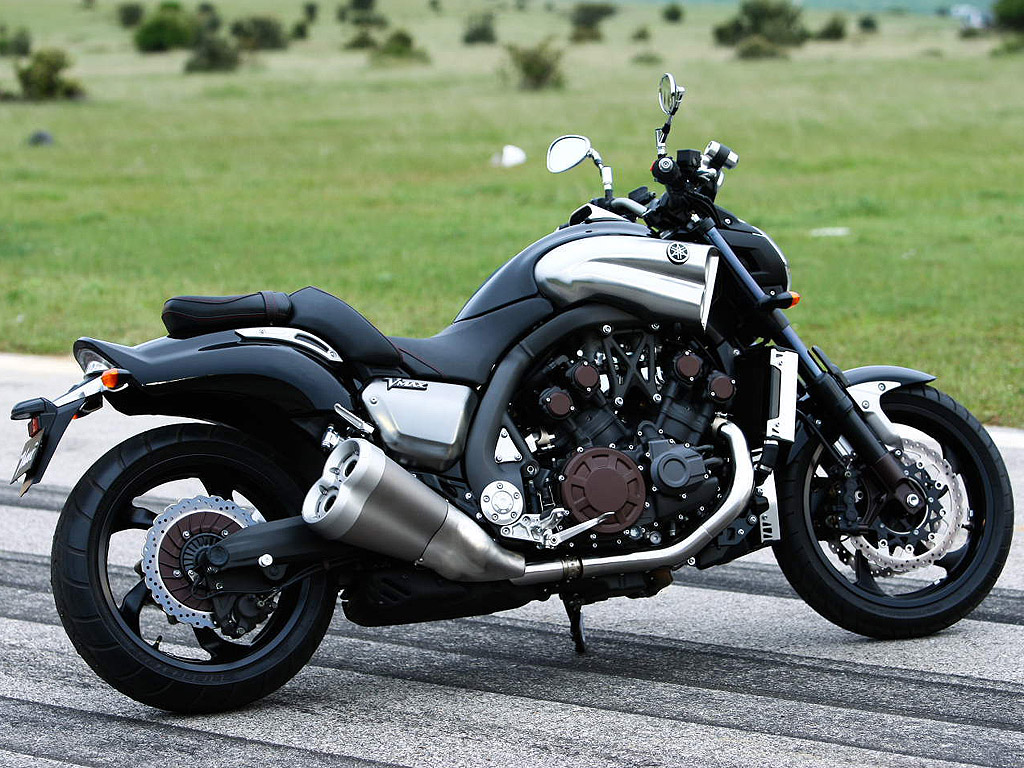 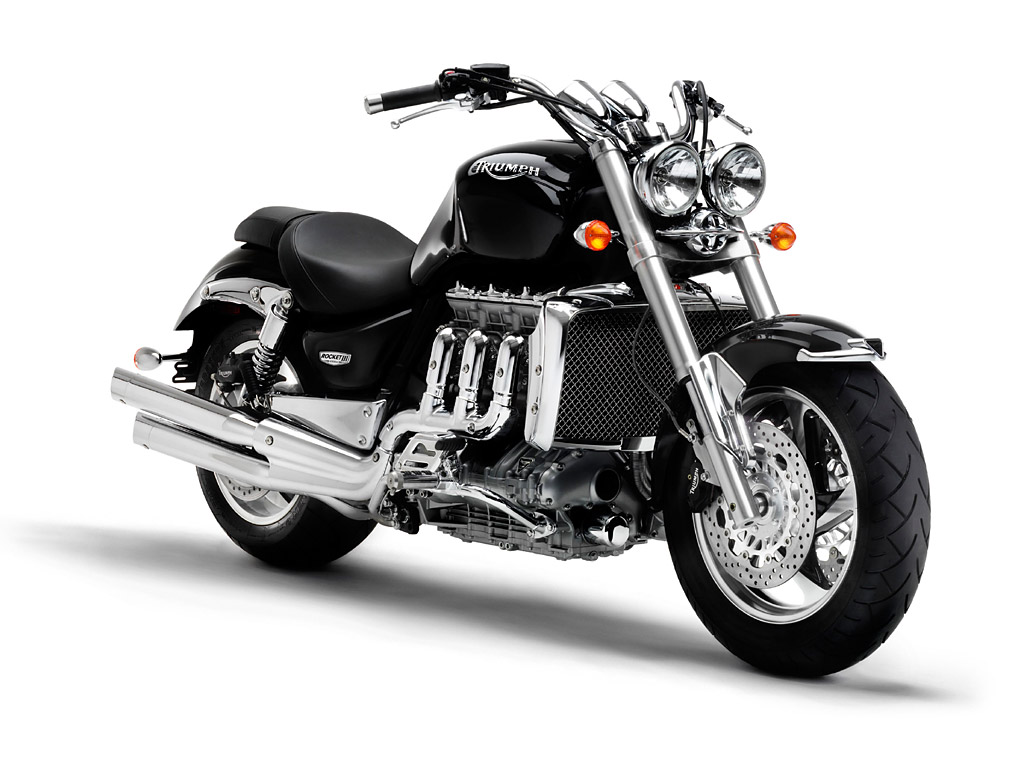 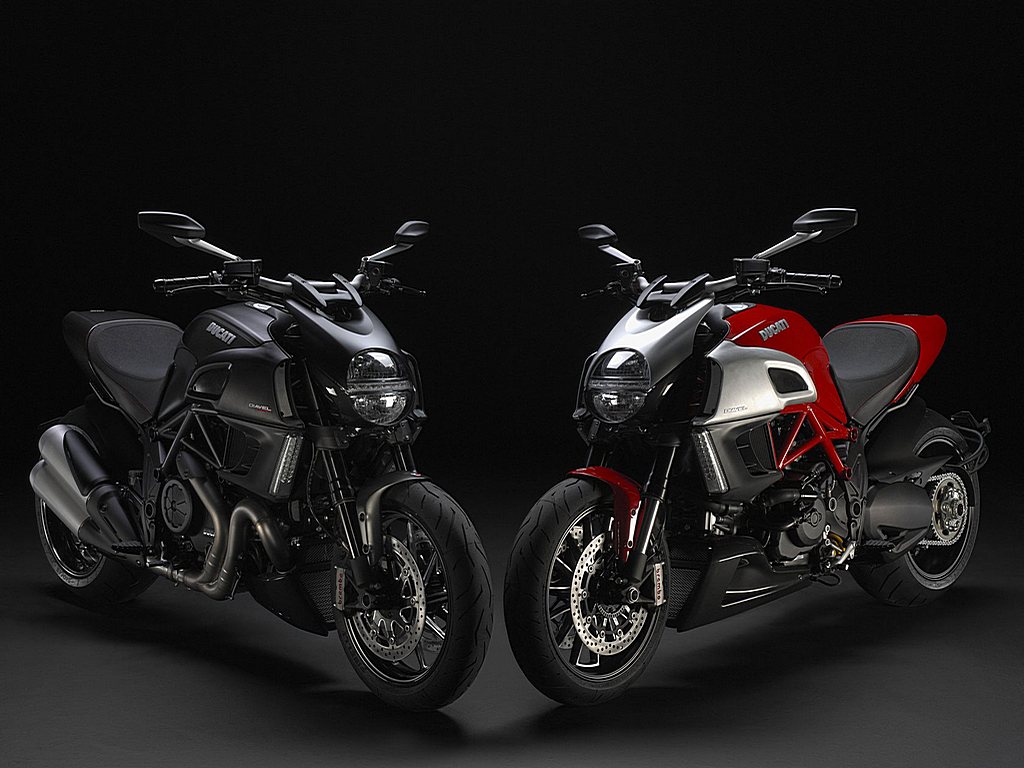 One of these elements is the single-sided swing arm it makes the rear of the Diavel really thin and allows for a 41-degree lean angle, which is truly a dream-feature in the land of cruisers. If you feel like you could use a little knee down, the Diavel can help you with this, on the right road.

Another sporty feature is the 28-degree rake angle: compared to the 31-degree value for the Vmax and the 32-degree rake angle of the Rocket III, it's obvious that the Diavel can turn faster. Nevertheless, this also means that the pilot must have a steadier hand on difficult sine roads, as this fast cornering capability can easily turn against the rider.

The Testastretta twin cylinder engine of the Diavel puts no less than 162 BHP under the rider and offers a 127.5 Nm torque. Not the best values of the three bikes we're looking at today, but it can still do 0-100 kph in 2.6 seconds.

The chain final drive solution might seem weird for a muscle bike, especially as most similar bikes come with a belt drive. It is precise and offers a fast, direct response to the rider, adding to the increased confidence while riding, yet coming with all the chain maintenance fuss some people really hate. The Ducati comes with a 210 kg (~463 lb) dry weight and this makes it the lightest of the three, but whether this makes it the fastest or the one with the best riding feeling or not, remains to be decided.

The 2012 VMAX follows the lines of the initial 1985 model: a bike with stunning looks and very aggressive appeal, packed with immense power. In fact, the Yamaha VMAX could be defined as a very successful blend between the sportbike technology and the iconic cruiser design, though the result commands the beholder to acknowledge that this beast belongs to a class of its own.

When it comes to the engine capacity, the VMAX sits in the second place in this weeks muscle bike trio; it boasts a V4 1679 cc (102 cubic inches) “heart” capable to deliver 200HP @ 9000 RPM, with a maximum torque around 166.8 Nm. The rake angle is closer to that of the Rocket III and this brings is closer to the traditional cruiser specs; after all, the Ducati has truly a lot of sport features which might be less alluring to the purist cruiser lover.

The massive engine and brutal amount of power come with a hefty weight increase: the total mass of the Yamaha VMAX (including oil, gas and others) is 310 kg (683.4 lbs). The VMAX is almost 50% heavier than the Diavel, but people used to driving the Yamaha claim the engine is so powerful that they had no issues with the bike's weight; it looks like placing the 15 liter fuel tank under the driver's seat also helps lowering the center of gravity and adds to the stability factor.

The VMAX is the most powerful of these three muscle bikes so choosing the shaft solution for the final segment of the drive train seems only natural. At the same time, if you're the kind of guy who does not like to get his hands dirty cleaning and oiling the chain, the cardan is by far the way to go. While the Diavel has a 6-speed gear box, the VMAX is a 5-speeder, with the fifth gear as an overdrive gear for reducing RPM at highway speeds, and it looks like it doesn't quite need more.

The Yamaha is built for a rather aggressive riding style and is suitable for both average and shorter riders; a bigger and taller guy like me would find himself a bit too uncomfortable for longer rides on both the VMAX and the Diavel. Nevertheless, you won't get to sit too long on a VMAX, as the small fuel tank will make you stop quite often; some guys testing the Yamaha complained that they've got around 80 miles on a tank refill and even less when driving really fast.

If you're looking for an insanely powerful cruiser to mix together the looks of a smaller bobber on steroids with the wild nature of a sportsbike and are not planning to commute with it daily, the VMAX might be one of the best choices around.

Finally, this week's muscle bike trinity's final member, the Triumph Rocket III. With a displacement just under 2300 cc, the Rocket III is the largest production motorbike from a major manufacturer; one might find way bigger custom bikes with V8 or helicopter engines, but you just cant go in the shop and come out riding them.

The Triumph Rocket III comes in two major flavors: the “standard” touring edition and the Roadster, but you can always go for the NOS-boosted version. No matter which one you choose, they all share some of the model's key feats. 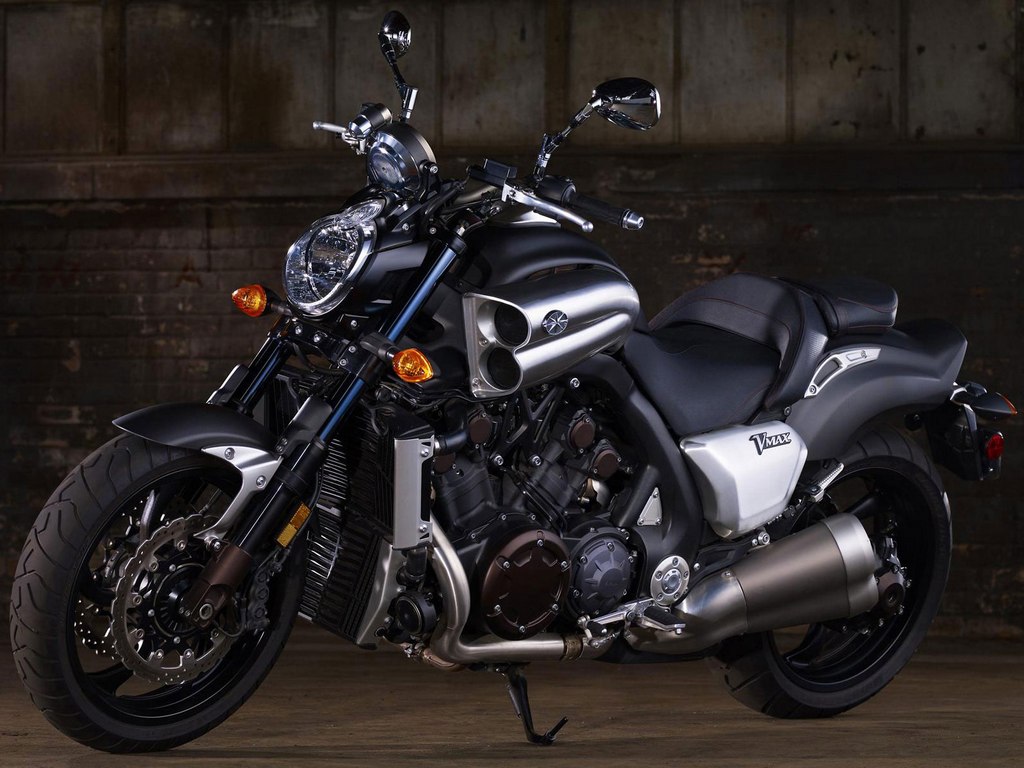 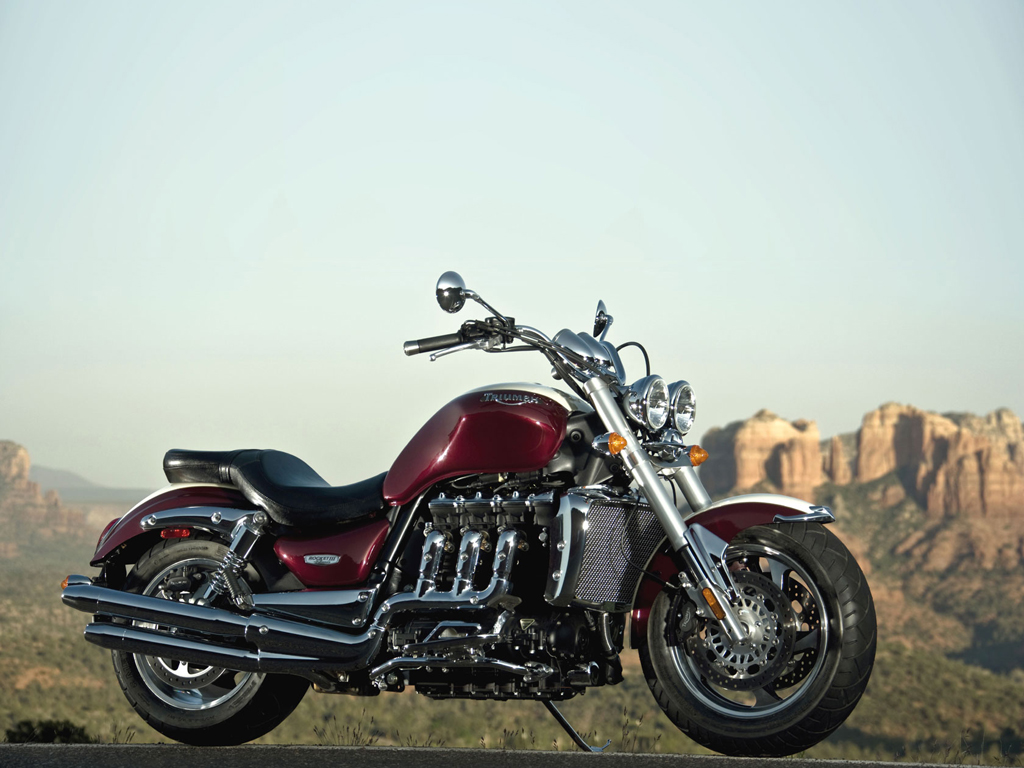 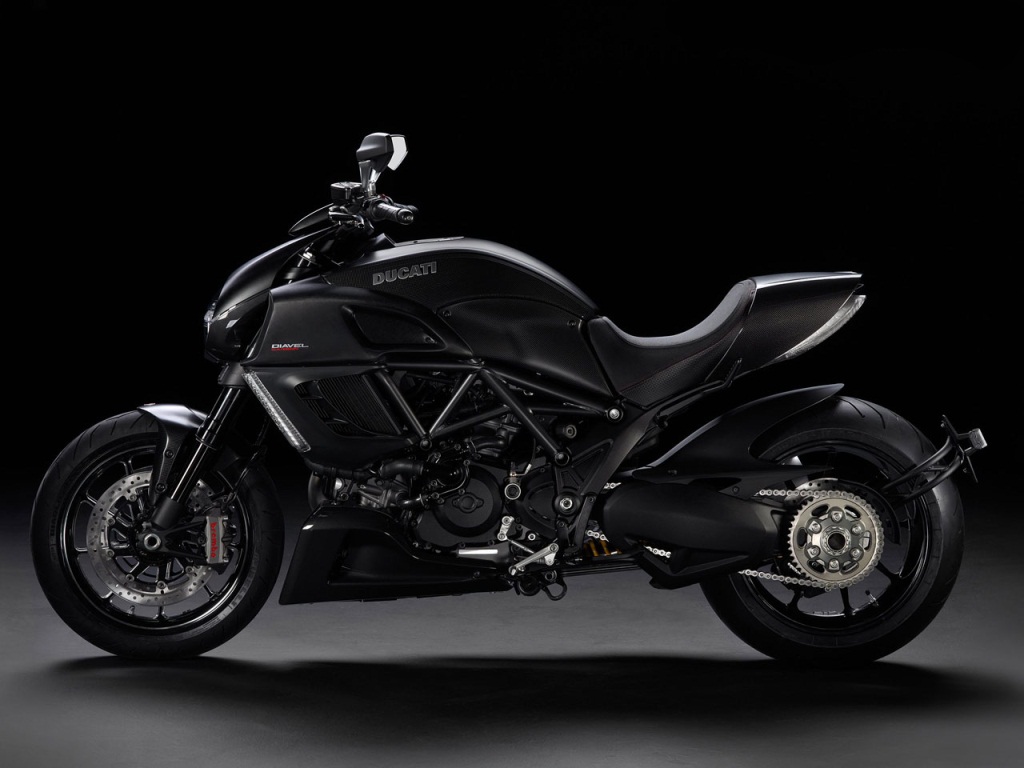 First of all, the Rocket III is huge: while the Diavel is in the common (200 kg) range; with a weight of 367 kg/ 140 cubic inches (including gas and oil), the Triumph is a really mammoth. It uses the same 320 mm front dual brake discs as the VMAX and a 316 mm single disc for the rear (the VMAX comes with 298 mm), but those who have tested both bikes said the Yamaha was firmer when braking.

Triumph's tires are wider than those on the VMAX, and the front one is even wider than the Diavel's. While Ducati and Triumph went for 240 rear tires, Yamaha decided for the 200. The wheels' sizes also differ: Diavel and VMAX come with 17” and 18” wheels, respectively, while the Rocket III sports a 17” front wheel and a 16”rear one.

The overall profile of the Rocket III is massive: the bike is much wider than the other two and the large fuel tank underlines the classic design line. In fact, the Triumph Rocket III is the bike with the most classic lines of the three: different front and rear wheels, a wide handlebar, classic upright cruiser-style riding position and a somewhat “smoother” design which will appeal older riders.

One of the distinctive elements to set the Rocket III apart from pretty much any other bike is the 3-cylinder architecture, with all three exhausts exiting the engine to the right side. The immense engine delivers a max of 146 BHP but the highlight of the entire specs list is the almost ridiculous torque: 221 Nm @ only 2750 RPM, grants the rider extreme sensations in any gear and at any speed.

Once in motion, the Rocket III will behave as its rider likes: one can simply enjoy the feeling of unbelievable confidence the combination of huge weight and tremendous torque provides and steadily tour through any turns, uphill or on the highway, or hold on really well to the bike and turn the gas for a power explosion which can effortlessly compete with speed bikes.

There are a lot of movies on the web showing the Rocket's brutal acceleration and if we also take into account its weight, it is clearly that we're dealing with a real beast which simply does not care at all whether it carries only the rider or an additional pillion passenger.

The Triumph is much closer to the original power cruiser idea by its very construction and design. Despite the massive engine and insane torque at low RPM, the Triumph riders report just a minimal shaft effect, comparable if not even lighter than what you'd get riding an R1100GS.

When it comes to fast cornering and leaning, the 360+ kg might be troublesome until the rider learns how to handle the Rocket III and the way it's power can make things much easier. Riding the Triumph fast on a winding road might not let you bring the best out of this beast, but experienced riders gripping tight to the bars and with a smooth throttle would definitely claim it's one of the bikes with the biggest fun-factor on Earth.

All in all, these three muscle bikes are hard to compare as each of them comes with its own distinctive feeling and look like they've been created to meet the needs of three different kinds of riders. With the Ducati Diavel and Yamaha VMAX blending in sportsbike tech and cruiser character and the Triumph Rocket III bringing the biggest mass production engine in the industry, it's up to the buyers to choose their favorite.