Word is advanced self-driving technology will eventually spread its net over anything that is used to transport people and cargo, which means it will get to change the way motorcycles work. But until then, take a look at this Harley Davidson cruiser enjoying a solo run on the highway.
7 photos

We’re not sure how this bike got rid of its owner, but it looks like it’s having the fun of its life down the highway shoulder as this car driver shows in his Youtube video.

According to his description, the rider was involved in some crash before this guy started filming. Somehow, the motorcycle spun back on its wheels and remained in gear, probably second or third, having enough torque at idle to keep going down the highway.

The rider is said to be roughed up, but generally ok, while the bike ended up running for about 2 more miles before hitting a temporary road sign and topple over. Poor thing only wanted to continue the road adventure...

Luckily it all ended before that concrete lane divider ended or someone on the oncoming way would have been seriously injured if the motorcycle would have ended up there.

Funny or not, beginner riders could consider this an instructional video about motorcycle balance. In case you didn’t know, the faster a bike goes, the more stable it gets in a straight line. This is caused by the gyroscopic forces developed by the spinning wheels.

It’s the same phenomenon that keeps a toy spindle up when it’s rotating fast enough. And it’s this force you have to overcome when turning left or right by countersteering and leaning. As you can see, even at low speeds, the forces that keep the bike up are strong enough to do so even when the machine gets nudged by road irregularities or scraping the wall. 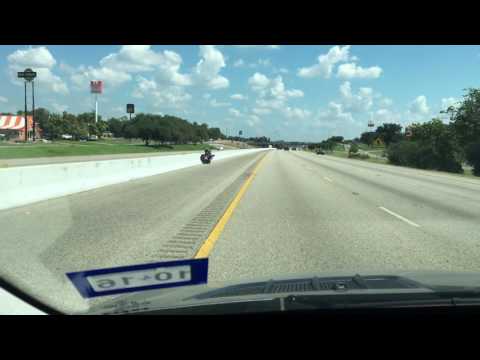