2 This Rider Can't Even Corner Right, Crashes Into a Focus

4 Motorcycles Could Be Banned In Hanoi by 2025

Never Take Your Girlfriend with You to a Track Day Event

Douchebag Rider Slams Into Guardrail, Others Crash Into Him

I hate large group rides. I can go ride with a few buddies I know and trust, but attending something as big as this Ride Of The Century (ROC) here is the least place you’ll ever find me. Why? It’s crowded with unruly riders that are bend on showing the world and themselves how great riders they are... and fail badly, usually causing chain crashes.
1 photo
Still don’t know what I’m yapping about? Just take a look at this lunatic in the clip below. Judging by the title, it took place at one of the recent ROC events, where such unfortunate accidents usually tend to happen.

The thing was captured on video by one of the participants, who was close to the guy crashing. How did it happen? Well, apart from the fact that the guy was stupidly riding on the shoulder, he was not paying attention to what lied ahead.

It happens fast, but if you pause the clip at the right moment, you can see him doing something with his left hand to the front of the helmet. Vaping or adjusting his lid, I’m not sure, but thing is, it took all his multitasking capabilities and didn’t saw that brightly-colored guardrail end right in front.

Don’t worry, he only got some crushed nuts and a valuable lesson, but two more riders smashed into his mauled bike and fell as well. Guess they too got their lesson - you don’t ride the shoulders of a highway, especially in a large group.

It’s stuff like this that drags down the reputation of bikers among cagers. Seeing tens of riders doing stupid stunts on public roads and erratically using the whole width of a road si definitely bad PR.

Do check the second video too for another point of view from one of the riders that crashed into the first guy’s motorcycle. 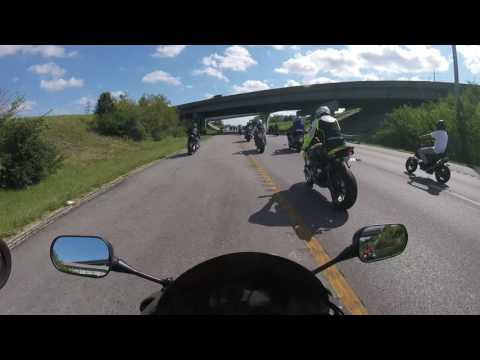