The Honda CRX has probably seen more pizza boxes delivered sideways at over 6,000rpm than any other car. It's another 80s styling icon with a strong nostalgia factor that's being modernized via rendering today.
1 photo
Japanese acronyms are sometimes pretty funny, and the CRX doesn't disappoint. It supposedly stands for Civic Renaissance Experimental. This was back then Honda wanted to make the smallest, most efficient compact cars. But some of the CRX's design flair survives to this day.

The CRX is what's known as a Kammback or K-tail, the idea being that the roof of the car slopes towards the back where it's abruptly cut. This aerodynamically efficient shape has impacted the Insight hybrid and the last two generations of the Civic hatchback. There's also the del Sol and CRZ, its two successors.

So how do you modernize a classic? You keep everything that's good about it and try to imagine what would happen if the makers had access to modern construction methods. That's what The Sketch Monkey did for his "2021 model year Honda CRX."

So, the profile gets glossed over with an airbrush to get rid of imperfections while a strong crease is added over the rear wing. Metal stamping wasn't good enough in the 1980s, but now Honda would have no problem doing bolder lines in the bodywork.

The back of the CRX is its most distinctive angle, so the artist doesn't mess too much with that. But because the taillights always date a car, they are updated to a more streamlined LED design. Also, a modern hot hatch wouldn't be complete without fake air vents, a bold exhaust tip, and diffuser-like elements.

But what do you think would power a CRX comeback? The 1.5-liter from the Civic Si might cut several seconds from the acceleration time. However, Honda seems to think every nostalgic project needs to be fully electric. 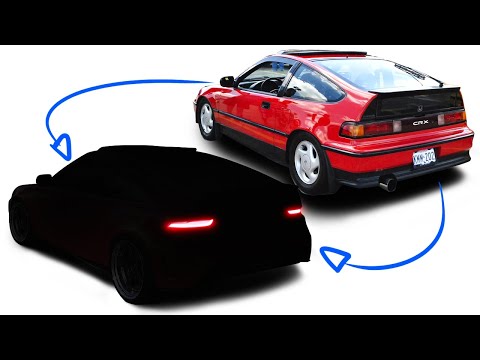