1 photo
We may be busy with last minute preparations for our trip to Stockholm for the European leg of the rally, but having a Tesla Model S P85D joining the grid is something we need to talk about. Hypercars, supercars, sportscars, opulent limousines, the craziest wraps, celebrities, you name it Gumball 3000 has it. If there is something the eccentric car event was missing it’s a proper EV racing along.

They have everything from actors like David Hasselhoff and Dolph Lundgren to personalized outwear collection and timepieces, but if there was one game Gumball 3000 wasn’t playing that’s the eco-conscious gig. That is about to change, though, since there’s a Dutch team that decided to bring Elon Musk’s fastest toy out to play.

Like last year, the 2015 Gumball 3000 is once again following a transatlantic route, although, in a reverse direction compared to that done in 2014. The flag will drop in Stockholm and end in the US, in Las Vegas. Apparently, the team is aiming for a world record attempt, driving the whole rally.

Since Gumball 3000 is all about the appearances, they also had the EV properly customized. Besides the orange wrap, the Tesla Model S P85D also received a proper pair of Forgiato rims. However, what is really unique about this particular model are the Living Colors Lightning.

Considering the US Environmental Protection Agency (EPA) official range for the Model S Performance model equipped with an 85 kWh battery pack is 265 miles, we hope they made sure there are plenty of superchargers available on the track. The Gumball 3000 Rallu is more of an endurance event than a competition, but it doesn’t mean the EV doesn’t need a fast charging station to keep the pace. 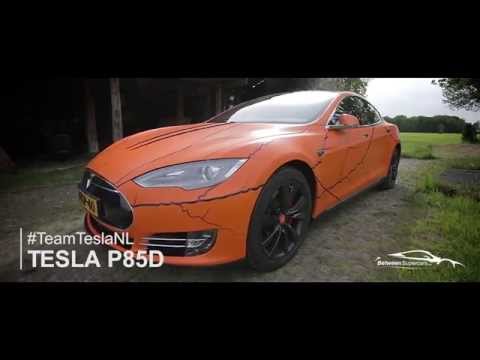