Seeing the numbers BMW claims for its new M3 and M4 cars, forum members around the world started having heated debates to settle whether the new M cars are faster or not than the more powerful M5/M6 combo.
1 photo
Of course, the discussions are still going on around the internet on various threads and they will probably never truly end. The truth of the matter is, you have to take into account a lot of factors when doing such comparisons because the difference between the cars is extremely slim.

When you’re dealing with tenths of a second, you start to realize that anything matters. From how heated the rear tires were and the tires themselves, to how the driver punched the throttle and how much he steered, everything matters.

What we have below is a comparison done by BerlinTomek, a Youtube channel that had the pleasure of testing both cars and filming them in the process. Therefore, it was only logical that a comparison be set up.

The cars used here are a BMW M4 Coupe and a BMW M6 Convertible. Looking over the specs we should have a clear winner, as always and it’s not the more powerful one of the two.

On the other hand, weight is also an issue and that’s where the Coupe wins. Focusing on shedding some serious pounds, BMW made the new M3 and M4 lighter than before and, compared to the heavyweight M6 Convertible, that might just be the edge they need to win drag races. Looking at the two cars side by side, you’ll notice that the bigger car is some 400 kg (882 lbs) heavier, a difference that’s hard to compensate for. And yet... check out the video... 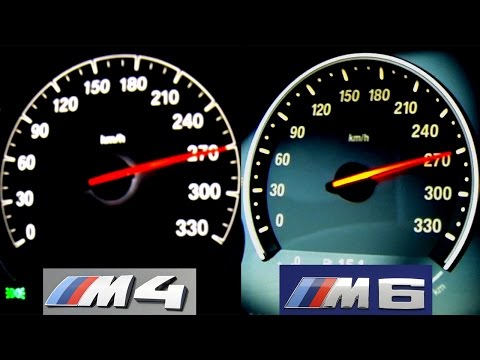