Lexus GS F was on scene at the 2015 Geneva Motor Show, where Toyota’s luxury arm had a pretty interesting stand if you ask us. But we’re here to talk about and see the GS F and its might V8 engine, so let’s do just that.
1 photo
Although the Lexus GS F made a debut earlier this year during the 2015 North American International Auto Show (NAIAS), the European market and sales prospects could not be ignored so here we are, staring at the sharp-looking beast in Geneva.

As you know, the V8 beast is based on the GS sedan but it has nothing to do with his obedient brother. We just love how Lexus takes care of sportier models and blesses them with new LED headlights, wide-mouthed front spoilers, unique multi-spoked wheels and stacked dual exhaust tips.

Changes are carried out in the cabin as well, where the performance sedan received new sports seats and the usual carbon fiber treatment in terms of trimming. However, the GS F’s beating heart lies under the hood, so let’s focus on that for a bit.

Lexus’ A-game is all about a naturally-aspirated 5.0-liter V8 powerhouse good for producing 467 HP and 527 Nm (389 lb-ft) of torque. Yep, you got that right, it’s the same one on the RC F and even the gearbox is the same, as engineers coupled the power plant with the eight-speed gearbox before adding the limited-slip differential with optional torque vectoring function.

We got close to the Japanese beast and filmed a short video focusing on the GS F’s appearance. Check it out below! 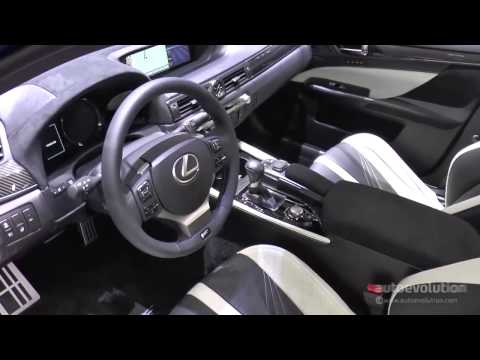