2 LEGO Cybertruck Could Easily Be Mistaken for the Real Thing

Back in April, LEGO announced the launch of the first ever official Ducati motorcycle, the Panigale V4 R. On June 1, the day most of the world’s countries are celebrating their children, the plastic brick bike has officially hit the shelves.
10 photos

The Panigale V4 R is the most powerful Ducati of all time, and it is partially because of this reason that the bike was chosen by LEGO to be remade in plastic. And as with all other LEGO official builds, this one cuts no corners when it comes to details, even functional ones.

The bike is part of the Technic line, and as such it features a number of working parts. More precisely, it is the first LEGO Technic ever made to include a working gearbox in this configuration - not the only one, though, as the toy maker has already introduced yet another working transmission in one of its products, namely on the Lamborghini Sian FKP 37.

In the case of the Ducati motorcycle, we are talking about a 2-speed that can be witnessed when it “activates the V4 engine” and simulates different speeds.

But the gearbox is not the only working part of the toy. The front and rear suspension go up and down, and the whole thing steers in an attempt to simulate a “GP ride” and make the one playing with it “feel like an official Ducati rider.”

The LEGO Technic Ducati Panigale V4 R set is meant for children aged 10 and above and comprises 646 plastic bricks. Most of them come in the official Ducati red color.

Once assembled, the toy motorcycle measures 32 cm in length, 16 cm in height and 8 cm in width. The replica features faithful recreations of the exhaust pipe, windscreen and dashboard. 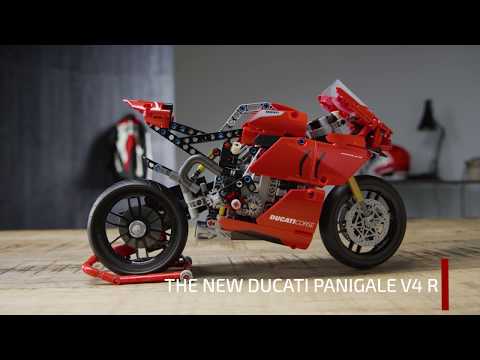