2 Deadly Pedestrian Crashes at Highest Levels Since 1990 in the U.S.

5 Kia Modifies Optima to Get Top Safety Pick+ Accolade from IIHS
Car video reviews:
Up Next

Working on the premise that buying good a bicycle helmet is more a matter of luck than informed choice, the Insurance Institute for Highway Safety (IIHS) launched this week the first rating program for this typeof protective gear.
1 photo
The program was developed together with Virginia Tech and is meant to give helmets the same star-based ratings cars get for protecting its occupants and pedestrians. For helmets, a 5-star rating means it offers good protection, while a 2-star one means poor.

The program builds on the existing Consumer Product Safety Commission (CPSC) tests. These call for the helmets to be able to prevent head impact accelerations of over 300 g, a level associated with skull fracture or severe brain injury.

This is not enough, says the IIHS, as the CPSC does not take into account the entirety of the helmet. For their program, the helmets are tested at six commonly impacted locations, including two at the rim.

Helmets are dropped on the anvil at two speeds taken from studies of real-world crashes — the median speed at which a rider's head is estimated to hit the ground and a higher speed equivalent to the 90th-percentile speed in the real-world crash studies.

Sensors embedded in the headform are used to measure linear acceleration and rotational velocity, estimating the risk of concussion from those measurements.

The IIHS already tested 30 helmets under the new system. Four got the highest rating, two scored 2 stars, and the rest were in the 3-4-star range. IIHS says that price does not seem to be a factor when safety is concerned, as both the $200 Bontrager Ballista and the $75 Specialized Chamonix got 5 stars.

"Our goal with these ratings is to give cyclists an evidence-based tool for making informed decisions about how to reduce their risk of injury," said in a statement Steve Rowson, director of the Virginia Tech Helmet Lab.

“We also hope manufacturers will use the information to make improvements."

Attached below is a detailed look at the testing procedure, as well as the list of helmets tested. 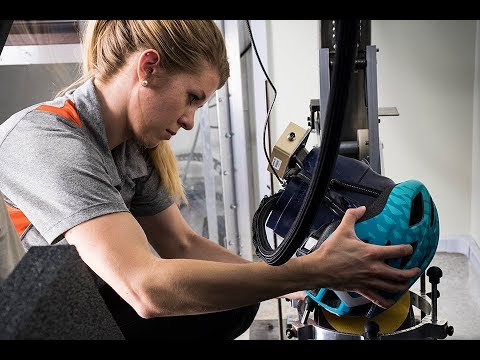