5 USMC Vipers and Venoms Fly for Over 400K Hours Combined, Carry on Into the 2040s
Car video reviews:
Coverstory

Helicopter Action Game Comanche Ready for Take Off on PC

Featuring a single-player campaign that invites players to make a difference in a fictional conflict of global proportions, Comanche is quite far from a “realistic” setting. It’s also important to mention that this isn’t a simulator game, but a purely arcade title.

Apart from the story-based missions that will advance the story, Comanche features some skill-based Conflicts missions that challenges players to complete different objectives to earn medals for special tasks.

Also, if you’re into multiplayer, Comanche includes some team-based multiplayer modes like Infiltration and Blackbox. The former is a 4v4 objective-based competitive tactical team multiplayer where you can play as the attacker or defender. Blackbox is a fast-paced multiplayer mode similar to Deathmatch. You’ll have to coordinate with your team and score the most takedowns to win the match.

Although this no longer looks like the game that made splashes in the early 90s, the futuristic setting sounds pretty cool, especially if backed by solid gameplay mechanics and great visuals.

Speaking of visuals, developers revealed that with the launch of the final version of Comanche, many missions got some graphical upgrades. Also, visual effects have been polished to look better, and lighting setups in missions have been adjusted for increased immersion.

Those who already played Comanche while it was still in Early Access should be aware that the latest update added seven new Conflicts missions and the ability to pilot different Comanche variants in some of them. Last but not least, two new enemies – sniper railguns and ICMB carriers, have been included in the game.

Comanche is not a triple A game, so if you’re into helicopter games, you won’t have to pay a fortune to try it out. Comanche is now available for purchase via Steam for just $20, so get to the Choppa! 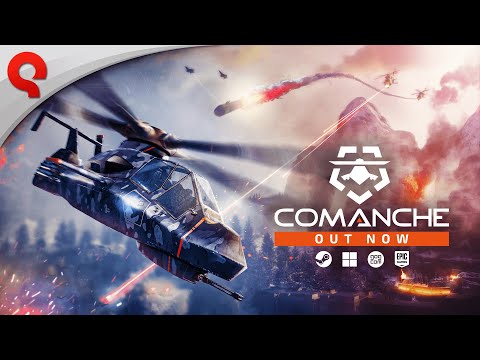