1 Minivan Passenger Throws a Soda Can at a Biker. It's Time for Road Rage

5 Guy Proves He Didn't Buy an Orange McLaren for Nothing, Gets Karma-Slapped
Car video reviews:
Coverstory

It says something about how boring our lives have become if witnessing a case of road rage is enough to send us into a state of hyperventilating excitement. Well, luckily, it's not any of us screaming in this video, but this guy who clearly can't contain his enthusiasm at the sight of possible violence.
1 photo
In most parts of the world, road rage has become something of a mundane occurrence. That's not something to be proud of by any stretch of the imagination, but it's how things stand right now. Our daily routine takes a very big toll on our disposition, so when another fellow traffic participant wrongs us in any way, we explode with anger.

Putting things this way, it's actually sad that not more people react the way this guy did. I find it very hard to imagine how a person such as him could switch from the attitude exhibited in this clip to screaming his lungs out in rage at a fellow driver. Such a mood change would probably be pathological, ranging from severe bipolar disorder to downright schizophrenia.

Seeing those two grown men get into an altercation really makes him react like a dog who know it's going to the dog park. He's essentially saying "oh boy, oh boy, oh boy!" while drooling and chasing his tail around on the spot. But since he's human, he simply screams (and we do mean he screams) "Oh my God, this is the best day ever!"

Luckily, his wife who is sitting right next to him and also filming the whole thing doesn't get upset. Who knows, maybe their wedding wasn't that great, and so she agrees this is much better. Or maybe she's well aware he can get carried away easily, so she let it slip. He's probably the kind of guy who loses it whenever the toast doesn't fall buttery side down. It's presumably why she loves him.

The two also seem to have a son (the wife says "you're gonna wake him up"), but this day still beats the one when he was born in the eyes of the husband. He's laughing like a maniac, and the only thing that would have made this video better is if we could have seen his face while doing it.

The dog parallel can continue because the wife tries to calm him down just like you would with a terrier. You just keep him away from the source of his excitement long enough for him to calm down. The clip ends before the wife can achieve that, but judging by the ending line, she probably has a lot of work to do. Better bring out the clicker and those treats.Some NSFW language: 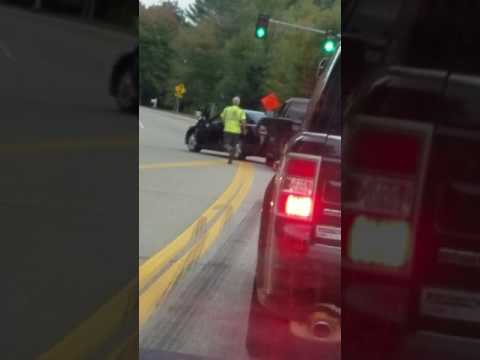