Florin Tibu
The charismatic road racer and TV personality that goes by the name of Guy Martin is becoming crazier and cooler with each passing week. After a horrible crash last year that left him with a lot of broken bones, he's back on the bike and doing even wackier (in a good way) things.
1 photo
For starters, he has said that he will not take part in this year's Isle of Man Tourist Trophy (TT), but that he will not step away from motorcycles for good. Yesterday, we reported that Nothern Ireland's Ryan Farquhar was chosen as Martin's replacement in team TAS Racing, and he will be riding the Tyco BMW S1000RR in the Superbike race.

Meanwhile, Guy Martin raced F1 star David Coulthard at Silverstone, but this is only a small part of the amazing things he plans to do from now on.

His biggest challenge now is to learn how to ride the wall of death. For this, he has "Mr. Wall of Death" himself as a mentor, Ken Fox. One of the greatest WoD personalities and a most spectacular stunt rider, Ken Fox and his 1925 Indian Scout will help Martin get used to what riding the Wall of Death means, with all its secrets and tricks.

Now, don't you think that Guy is simply looking for ways to spend his time when he's not repairing trucks (which is actually his job). The wall of death he and Ken Fox prepared is the largest ever made, and Martin is eyeing to break some records with it.

This structure has been specifically designed and built from shipping containers and "will attempt to go faster and further than ever before, setting a new world record by scaling incredible new heights on an enormous wall," Martin's Facebook page reads.

Martin has also trained aboard a stunt plane with ex-fighter pilot Mark Greenfield, to get acquainted with the massive G forces he will have to endure while riding the vertical wall in circles. 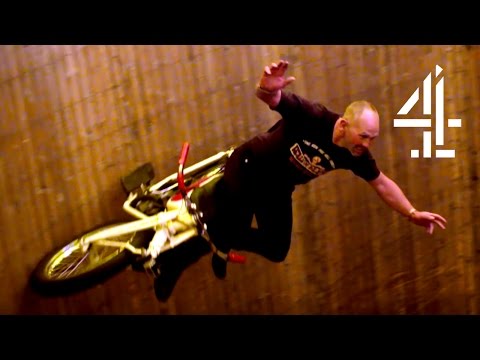