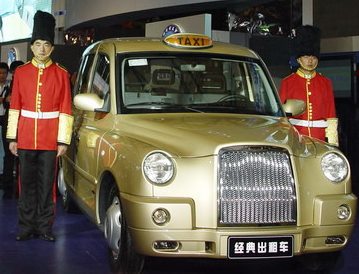 Now there's an idea for you Londoners out there. While this would surely improve the air quality in the British capital, the Brits would have one hell of an electricity bill on their hands at the end of each month. Not to mention the fact that there would have to be power outlets at every intersection.

But seriously now, with more than 25,000 taxis registered in London, that doesn't sound like a bad idea. Geely, the Chinese car manufacturer came up with this idea. They co-own Manganese Bronze, the company that makes London cabs, and they just popped the question to London officials.

The whole thing is right now in project form, with more research needed to see if this thing will actually work, but Li Shufu, the manager of the Chinese company said in an interview for the Financial Times that “One of our ideas is to convert London taxis. We are doing research on the project”.

Geely is already developing its own version of an electric car, just like all other Chinese companies, the Panda model being the first in line to see this change turn into reality. But the company has recently seen its share slump at the stock market after the Transport for London decided hundreds of its cabs off the streets after several models had their engines catch on fire.

The idea is to apply the low-cost technology that the Chinese use into something very emblematic, like London cabs, which have a long and enduring history. That's exactly what Yu Wei, general manager, was thinking when he said: “We think the taxi can present a kind of British culture, which is traditional and iconic and elegant. British people have a really serious culture and Chinese people are hard-working. If we can combine [British] culture with [Chinese] diligence, together we can produce a very good product”.

Which is just in time, because Geely's main rival, SAIC Motors, has just relaunched the MG TF sports model in Birmingham, based on the MG Rover who went belly up. It really looks like the Chinese are set to take over Great Britain.