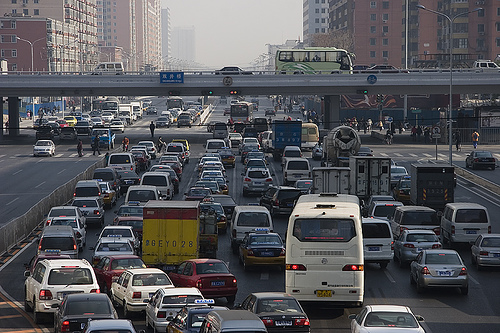 It's true. Instead of focusing on hugging trees like some organizations do, the Chinese have come up with a more efficient way of lowering city pollution levels: banning driving. Drastic as it may seem, Beijing authorities have merely reinstated regulations that were valid throughout the Olympic Games.

If you recall, some time before the Games' ceremonious opening and throughout the competition's duration, a special bill was issued stating that Beijing residents should all leave their cars at home once day per week. The solution had an immediate welcoming effect with city-dwellers having reportedly said that this year's August was the cleanest they had in the last decade.

This is only the first step authorities have taken into battling pollution as the over-crowded metropolis sees 1,000 new cars join the clogged Beijing arteries every day. The city's 3.4 million registered vehicles have been making air inside the city nearly unbreathable for some time until today when Chinese officials re-implemented the measure of having cars taken off the streets daily.

Currently on trial period, the restrictions are “expected to reduce Beijing's average road traffic flow by 6.5%," a city official was quoted saying by state new agency Xinhua. The measures are from being as severe as the ones taken during preparations for the Olympic Games when besides keeping cars off roads, a vast number of factories were also closed.

During the six-month trial run, some 800,000 cars are expected to be kept off roads daily with number said to be increased in case of severe pollution. Having come into effect just today, cars with license plates ending in 1 or 6 were not allowed in traffic. Following a small number increase/bigger number decrease pattern, cars with license plates ending in 2 and 7 won't be allowed on roads tomorrow and so on.