3 UPDATE: This Is Why You’ll Never Valet Park You BMW Again

From later this year, travelers going out of or coming into London’s Gatwick Airport will have their parking needs taken care of by a robot valet named Stan.
6 photos

Stan has been designed to be used successfully in large parking lots, including the long-term ones found in airports. Having already been put through its paces at Lyon and Charles De Gaulle airports in France, the robot is now moving across the channel to serve British needs for a trial period of three months, starting later this year.

Stan is a driverless, electric forklift if you like, powered by an artificial intelligence designed to think about nothing but optimizing parking spaces. Using a variety of sensors and other systems, Stan can determine everything from the size of a car to the size of the parking space available, matching one with the other with incredible precision.

The system is straightforward enough.

After arriving at the airport’s parking lot, all a driver has to do is scan the info for the flight and abandon the car is a garage called box.

Once it clears enough time in its schedule, Stan will arrive at the box and measure the car to see where it will fit best. It then pushes its arms underneath it and moves it to the assigned location.

The Stan parking spaces – 270 of which will be created at Gatwick – are not open to the public, allowing only robots to move about.

Once the owner of the car returns to the airport, the vehicle will be waiting in the box. This is possible thanks to the fact that the system already knows all the flight info of the owner from the scan performed when the car was dropped off.

Stan is manufactured by a French company by the name of Stanley Robotics. It can handle all types of cars, provided they do not exceed 6 meters in length and 3 tons in weight. 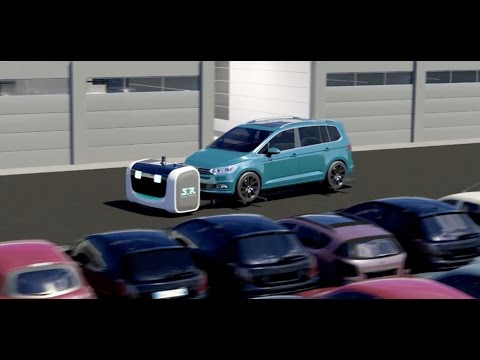