4 Elio Motors Closing In To Production Phase: Should Start Next Year

Sounds a bit crazy to make an engine that uses an odd number of strokes, right? We have 2, 4 and even 6-stroker engines so far, with the latter being still a prototype that injects water in the cylinders right after the exhaust to create steam and obtain two additional free strokes from the wasted heat. Still, a 5-stroke engine theory was invented by Gerhard Schmitz for quite some time and a British company called Ilmor managed to create a fully functional prototype.
1 photo
Formula 1 and IndyCar engines designer and supplier Ilmor created what many thought it’s nonsense - a fully functional five-stroke gasoline engine that is able to obtain an increased efficiency than regular 4-strokers. It sounds like a very complex thing but its working principle is quite simple.Classic 4-stroke
A normal four-stroke gasoline combustion engine found in every car now works in four steps: intake (piston goes down sucking the air-fuel mixture in), compression (piston goes up compressing the mixture), explosion (spark generated by the sparkplug ignites the mixture and sends the piston downwards) and exhaust (piston goes up again forcing the hot burnt gases out).

This sounds like a very efficient process for a non-car guy, but a lot of energy gets wasted during the ignition and exhaust phases, and that’s because the process generates a hefty amount of heat that basically needs to be discarded in order to avoid problems. Not to mention that you only have one single power-stroke per cycle, the other three being maintained by the flywheel’s inertia or the other cylinders, where available.Ilmor 5-stroke
The five-stroke concept uses two firing cylinders (High Pressure - HP) that work like on a classic 4-stroke cycle and a third further-expansion central cylinder (Low Pressure - LP).

The key here is the extra cylinder which is alternatively used by the other two to dump in extra pressure right after the power stroke ends. As soon as the piston reaches the bottom of the cylinder, the exhaust valve opens letting out the hot expanding gas exit the cylinder. Normally, that would go out the tailpipe but that’s simply wasted energy.

Instead, the still-hot exhaust gas gets dumped into the third cylinder, pushing it down and creating the extra fifth stroke which gives the crankshaft another 180 degrees of powered rotation. If that’s hard to picture, just watch the video bellow for the animated process.Advantages
The extra cylinder provides an additional expansion process which allows for more work to be extracted, hence increasing thermodynamic efficiency. The engine will also run an overall expansion ratio approaching that of a diesel engine while also working on a minimized pumping work due to the downsizing effect from highly rated firing cylinders.

Overall, the five-stroke engine offers fuel consumption and emission levels comparable to that of modern diesel engines without the particles and NOx emissions “offered” by oil burners.

For example, the 700 cc turbocharged five-stroke engine made by Ilmor offers 130 hp (over 185 hp per liter) and 166 Nm (122 lb-ft), which is already 7 hp more than Ford’s 1-liter turbo petrol EcoBoost, while consuming only 226 grams of gasoline per kWh - the measurement was done on a test stand while the engine was operating at an optimal speed, so they haven't provided the... usual figures yet.

Ilmor is currently looking for an investor to create a second five-stroke prototype engine that will be tested on a vehicle. Let’s hope they’ll find one soon, because this technology could actually improve hybrid powertrains' efficiency by 10 percent. 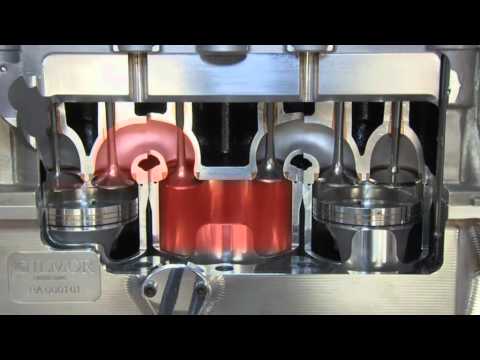