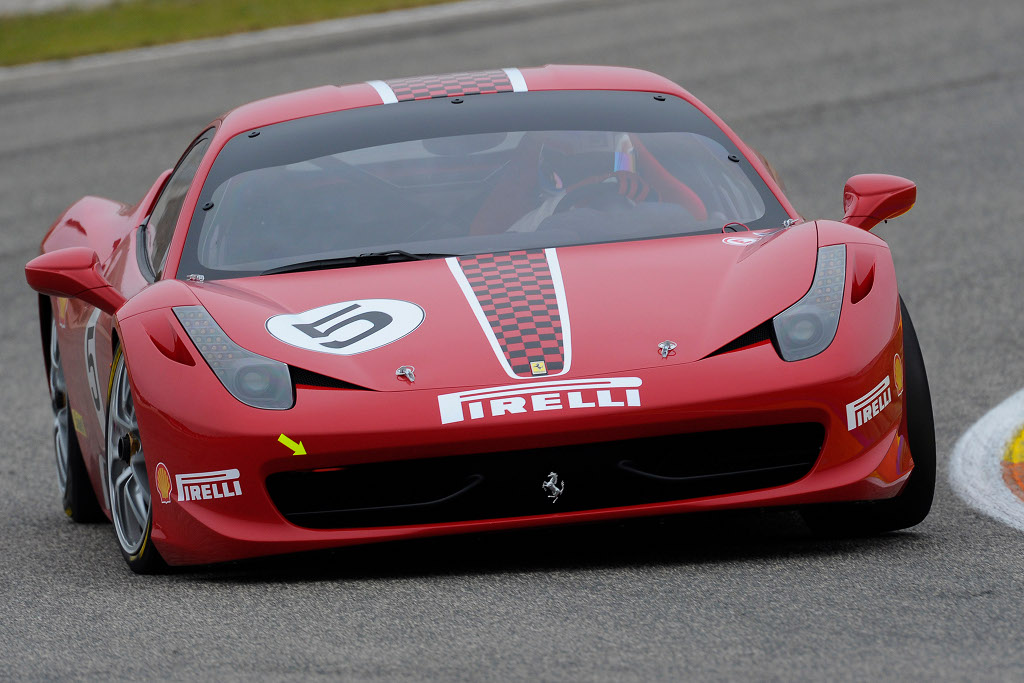 Ferrari introduced the 458 Challenge race car back in July, and today the vehicle has made it public debut at the Bologna Motor Show (Italy). The vehicle’s 4499 cc V8 unit has remained untouched, offering the same power rating of 570 hp at 9,000 rpm.

However, the dual-clutch F1 gearbox has been tweaked to deliver higher torque at lower revs. In addition to that, the racer uses the street version’s F1-Trac traction control system, which works together with the E-Diff to keep the car on track. The adoption of the traction control system is a first for a Ferrari track car.

The vehicle has been on a serious diet, which targeted both the exterior and the interior elements. It uses thicker body panels and comes with weight-reducing materials such as carbon fiber and Lexan.

Also, the car features a tweaked suspension that comes with steel uniball joints, stiffer springs, single-rate alloy dampers, bringing the car 50 mm closer to the track. The stopping power is provided by a Brembo CCM2 carbon-ceramic system, while the connection to the road is established through a set of centre-nut 19-inch forged rims, which use wide Pirelli slick tires.

Ferrari claims that the new performer, which can generate up to 1.6 Gs of lateral force, has managed to lap the company’s Fiorano test track in 1’16.5”, outperforming its predecessor, the F430 Challenge, by two seconds.

The Ferrari 458 Challenge will take part in the company’s one-make series next year, which includes Italian, European and North American championships.

You can get the full details in the press release below (PDF file).