2 Fashion, Simplicity, and Affordability: Traits of the Ero 500 E-bike From Linus

5 Trek's 2021 Powerfly FS 4 e-MTB Will Take All the Abuse You Can Throw at It
Car video reviews:
Coverstory

The biggest and best-known manufacturers of bicycles have, in the past years, also begun including e-bikes in their repertoires. That was a smart move as sales have nearly tripled this year.

What we see here is one of the freshest urban e-bikes to hit our streets. It’s called the Verve+ 3 Lowstep. The manufacturer for this chick-magnet (as this design is usually designated for the female sex) is not hard to guess. Have a good look at the cover photo because its name is right there on the frame.

If you don’t have your reading glasses on, it says Trek. That’s right, Tour de France, downhill domination Trek. In case you didn’t know, they also meet this niche of the biking world. And in doing so, the team also brings with it an enormous history regarding bicycle and e-bike design. Hell, that’s one of the reasons this grandma-worthy bike comes in with an MSRP of $2,999. Pretty high when you consider you can pick up an e-cruiser with a similar look for nearly a third of this price.

But then again, you probably won't be receiving the same treatment Trek is known for. After all, how many manufacturers do you know that offer a lifetime warranty on their frames? Heck, I’ve still got my first 2900 that I bought 15 years ago. And aside from some dried-up mud from my last ride... that’s really all I need to say. After 15 years, it’s still holding up.

Speaking of frames, the + 3 Lowstep is composed of an alloy that Trek calls Alpha Aluminum. With their practices in hydroforming and tinkering with alloys, Trek is able to offer a frame that is as capable as its carbon fiber brethren. That's ultimately necessary when building an e-bike, as all the extra components are the real killers for light-weighting.

If you’ve looked closely, you may have also noticed no suspension anywhere on the frame. Well, this sort of e-bike doesn’t really need one. You won’t be romping down any hills on the way to the grocery store or taking on the freshest trails. No, with this one, you’ll have to stick to asphalt. At best, you can feed your adrenaline needs with a bunny-hop off the nearest curb.

Now, before you let your gray-haired O.G. take a ride on this, take into consideration that Bosch is providing the motor and controller for the bike. A Bosch Active Plus with 250W and 50 Nm (37 lb-ft) of torque is ready to start making that loose skin flap with a 20 mph (32 kph) top speed.

As for the energy to make grandma feel like in her twenties again, you won't find a hip and chiseled version of grandpa, but a Bosch PowerTube 500 with enough juice to run both their pacemakers. For how long exactly, we don’t know.

As for most other secondary components needed on a bike, Shimano takes care of the shifters, derailleur, cassette, and even brakes (160 mm, 6-bolt hydraulic) for the Lowstep.

Altogether, with a few other small components, the entire EV comes in at just 55.28 lbs (25.07 kg). That may sound a bit heavy, but when you want to make sure grandma is stable and able to carry out her daily rituals, the weight helps.

Just make sure your ancestors don’t get any ideas about going for a joyride on the cargo rack; the Lowstep can handle that too (up to 300 lbs or 136 kg), it’s just not safe. We’ve had enough funerals this year. 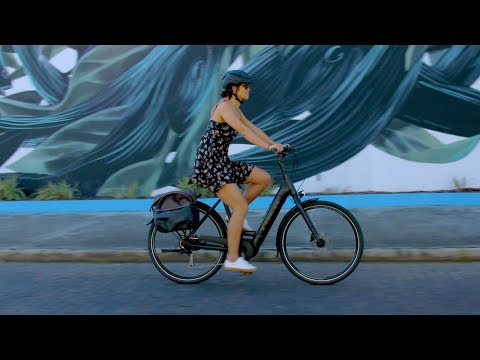