3 B-1B Lancer Takes Off at Dusk, The Bone Shows Us All Four GE Engines at Full Throttle

Over the past year or so, the F-35 Lighting has been a constant presence here on our website, as we dig deeper and deeper into the world of military machines. And, to those that have been watching out for the plane’s apparitions, one thing is clearer than most others: this bird is one beautiful machine.
11 photos

Designed by Lockheed Martin and flown for the first time in the mid-2010s, the F-35 is one of those few fifth-generation aircraft currently in operation, and the first supersonic stealth fighter with short take-off and vertical-landing (STOVL) capabilities (the F-35B variant fielded by the Marine Corps).

Like most fighter jets, the F-35 has been designed for functionality, but as usual, when it comes to such machines, this also translates into a visual beauty that manages to keep audiences’ eyes glued to the sky during air shows.

But part of that beauty is owed to the pilots’ skill of showing all the great angles while performing stunts. And we’ve seen that countless times, as we’ve watched the plane fly on various kinds of passes, in formation with veterans the likes of the P-51 Mustang, or buzzing the Canadian CN Tower.

When on missions though, the plane doesn’t care how it looks, and neither do the people taking snapshots of it. Case in point the pic we have here, showing an F-35 belonging to the U.S. Air Force conducting a nuclear design certification process and looking all ugly and fat, like some wingless tube with an afterburner at one end, while doing it.

This pic was taken at Nellis Air Force Base in Nevada, back in September, just before the airplane completed its certification. What that means is that the plane could successfully carry and drop B61-12 Joint Test Assemblies (JTAs), which is the military way of saying thermonuclear gravity bombs.

There were two such planes flying back then over to the Tonopah Test Range and dropping an equal number of such devices (you can watch the video of how that went below), without them exploding, of course. 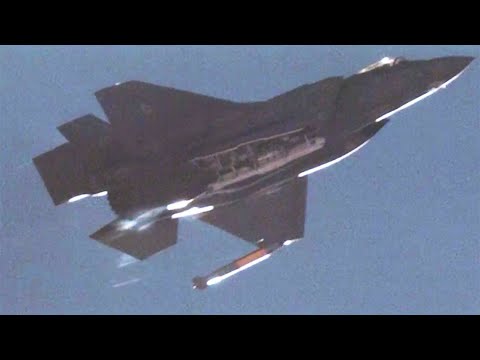