1 2017 BMW 5 Series Gets Tested by EuroNCAP, It Scored Five Stars

EuroNCAP Tests Fiat Doblo, It Gets Three Out of Five Safety Stars

EuroNCAP published the results of two vehicles sold in on the Old Continent that it tested in its most recent session.
8 photos

We decided to focus on the 2017 BMW 5 Series, but we have not forgotten about the second subject of the testing session. We are referring to the Fiat Doblo, which is a utility vehicle designed by the Italian company in partnership with GM Europe, in the form of Opel.

While the brand from Russelsheim will not be a part of General Motors in the future, the deals that gave Opel shared parts with some Fiat Chrysler Automobiles products will still exist, which has led to an intriguing conclusion made by EuroNCAP.

The current Doblo was launched in 2010, and it received a minor facelift in 2015. It was tested back then, and the European crashworthiness testing organization offered some advice to the two partners, Opel and Fiat, on improving the safety level of the product.

The Italian version of the platform was tested in the latest session, and the result was three stars out of a five possible. EuroNCAP explained that the product's age explains the rating, and that it highlights “lack of ambition to compete" on safety with other brands.

Opel has not facelifted the Combo in a similar fashion with Fiat’s changes, which leads EuroNCAP to expect even fewer stars for the German version of this model.

Evidently, both products are made in the same factory, but some elements are different, which could lead to differences in safety results if it gets tested soon.

However, Opel has decided against those changes to develop an entirely new Combo, which is co-developed with its new owners, the French at Groupe PSA. The organization expects to test the replacement of the Opel Combo in 2018.

The organization’s representatives criticized Fiat for employing several models for a “long time” on the market, which has led them to be “well behind the class leaders” when safety is concerned. 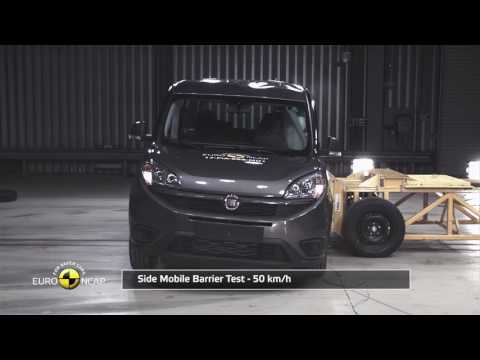