1 Atheris is a Trike with Magnetic Motors, Powered by Graphene Batteries

2 UReady Trike Will Have You Running Like Forrest Gump

BMW Probably Hopes Christoph Waltz' Star Power Will Save the iX, We Bet It Won't

So, aside from getting eaten by wild animals, what's the worst thing that can happen while you’re out camping? Not having anything to eat. Or even worse, having packed food that has gone bad and cannot be eaten any longer.

That’s my worst-case scenario. Luckily for people like me, a company called Furrion has created a cooler that is able to keep your food edible for up to two weeks, under the right conditions of course. And the best thing is that it’s no bigger than classic coolers we’re used to.

It’s called the eRove and it’s currently promising to extend your camping trip or any other trip for that matter. When it comes to food, everybody knows what it means to need to pack for a longer period of time. Your usual camping trip lasts about 3-5 days, so packing food and drinks is absolutely essential. But most refrigerated foods don’t last longer than a day once taken out of their cold haven.

Well, now we don’t have to worry about anything while taking our trips. The eRove can keep your food and drink cold for up to five days. And that’s just on the battery function alone. Five days! When is the last time that cooler you have in the garage has ever kept your food cold for five days? Probably never, as they're not designed to be able to do that.

Keep in mind that battery is swappable, and can be replaced with a fully charged one in no time. To recharge the battery you can use the AC adapter for home use, or a DC adapter while on the road.

Oh, keep in mind that this beast of a cooler has an internal capacity of 50 qts (47 liters). Just to put it into perspective, that’s a total of 72 soda cans stacked atop one another. And that’s not counting the extra 6 qts. of dry storage the Furrion can carry, which mind you, looks a lot like a support for an extra battery.

So how cold can it keep or food? The team has designed the eRove with a temperature range from -8 degrees Fahrenheit (-22 degreese Celsius) to +50 F (10 C). Easily allowing you to adapt the temperature based on the foods you have. All this is to be controlled via the touch pad and display found at the front. Oh, it also comes equipped with USB charging ports, and even wireless charging for phones with this capability.

Now, here’s where things start to get tricky. That five days, we mentioned, that’s nothing. By adding a little bit of ice to the already electric powered cooling, the cooler is able to keep your food at optimum levels for up to 14 days! Ok. That’s just amazing if you ask me.

I remember going camping when I was a kid and ended up eating soggy sandwiches, mushy chicken tenders, and the occasional withered fruits and veggies. Where the heck was this 20 years ago?

If 14 days still sounds like it’s not enough, remember we live in the 21st century, and have begun to have a decent grasp upon solar energy. That being said, Furrion also has an additional solar panel you can buy for the cooler and literally keep it running until some component or another gives out.

However, the team made the eRove so sturdy, with its 3-inch ABS and foam walls, and aluminum interior, that it can even be used as a supplementary fridge/freezer when at home and not on the road.

Throw on a bottle opener, umbrella holder, and a stowaway food tray, and this cooler is ready to do everything but cook. You’ll have to check out some other Furrion products for that. But don’t worry, we’ll bring that story to you. Oh, and take a wild guess as to how much the basic starter pack costs on IndieGoGo. No clue? Click here to check it out. I wouldn't want to spoil the surprise. 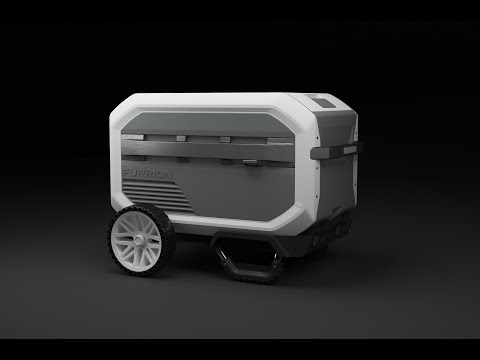 The NuBike Is a Chain-Less Bicycle That Set Out To Reimagine Pedaling, to No AvailSee all coverstories