3 EV Motorcade on the Streets of Washington, DC

Home > News > U-turn
Vlad Mitrache
Have you ever seen people taking their jobs too seriously? We don't know what it is about it, but it's mostly people who are supposed to protect something that tend to do it. Tell a man to guard a rusty nail, and he'll start seeing threats all around.
5 photos

Personal security for A-listers makes no exception. Sure, they do have to face overly-excited fans who want to have their picture taken with the star or ask them to sign on inappropriate parts of their bodies, but those are just nuisances and not real menaces.

Even so, Drake must feel particularly threatened if he has to drive around the city with no fewer than three large SUVs tailing his Maybach (by the way, Drake, that's a pretty old model. You might want to have it replaced). I mean, we wouldn't be surprised if even the President has fewer cars in his motorcade on some occasions.

And the parallels with the man in the White House don't stop here. Apparently, Mr. Drake thinks he's entitled to a different set of rules than the ones that govern traffic for the rest of us - or at least his goons do - if events in this clip are anything to go by.

The driver of this Tesla was approaching an intersection going down the first lane of a wide, one-way street. To his right, a Maybach was waiting for its turn to cut in. The driver leaves way too much space between himself and the car in front, so the luxury German limousine jumps in.

Since he didn't want to be left blocking the intersection, he refuses to allow the other three black SUVs to follow. Whether that was the real reason or he just didn't like being bullied is anyone's guess, but we think it's somewhat irrelevant.

Drake's entourage didn't like that, so they merged anyway and then moved over to the right, on the bicycle lane, to get in front of the Tesla. One guard got out of the car and positioned himself in front of the EV to allow the three SUVs to pass.

The driver was obviously infuriated, but he refrained from escalating the situation. He asked the ad-hoc traffic officer what he was doing, which prompted the reply "asking you to stop." Well, if that's "asking," we wouldn't want to see what "forcing" looks like for this guy.

When the man in the Tesla brings up the "I had the right of way" argument, the bodyguard nonchalantly says "Then run me over, bro!" His lighthearted mood continues as he jokingly says he'll take the guy's Tesla right before he turns his back and ignores him altogether. At this point, the driver does the only sensible thing and reads their license plates out loud, so he could file a report later on.

To their credit, the drivers of the last two SUVs do wave "thank yous" to our guy in the EV, but judging by his reactions, he didn't seem impressed. Nevertheless, the motorcade was reunited - at least until the next junction. 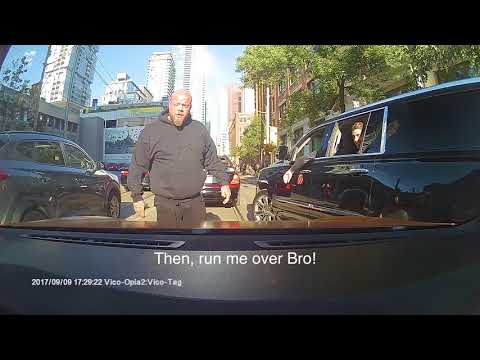