5 Drag Race: BMW M4 vs Alpina B3 Biturbo
Car video reviews:
Up Next

Dan Bilzerian Drives a Tank Over a BMW 7 Series

We’ve seen all sorts of drag races around here, pitting the most unbelievable cars against each other. Sometimes, the racers are not even direct rivals and come from completely different segments but that really doesn’t matter when you’re racing does it? However, this time, these two have more in common than you’d think.
1 photo
The first competitor, in the red corner as a boxing announcer would say, is a BMW Alpina B5 Touring, a car that was as much designed to carry you and your family on a trip in comfort as it was prepared for racing.

Sure, it’s a people hauler but when you need it to, it will tear up asphalt in the blink of an eye. Under its bonnet hides a 4.4-liter V8, a precursor to the N63 units used on today’s 550i model. However, it was tuned by the guys from Alpina to deliver no less than 500 HP instead of the 333 it had as stock. That’s just shy of what the M5 used to make.

The Maserati on the other hand, is not a people carrier. This is an Italian thoroughbred that should spit fire through its nostrils. It’s not all that however. It uses an engine that’s marginally smaller than Alpina’s, a 4.3-liter V8 making 405 HP and 460 Nm (339 lb-ft) of torque. So you’d think that it’s going to win this because of its lighter construction, right?

Well, you’d be surprised to learn that the Maserati’s unladen weight is just shy of two tons. That’s right, a 2+2 seater that weighs two tons! By comparison, the BMW, even though it’s a Touring, is 200 kg (440 lbs) lighter! So, any bets on who wins? 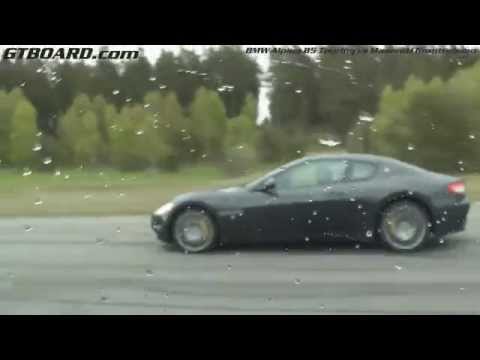