Bogdan Popa
With displays installed in cars these days getting larger and larger, the adoption of smart infotainment systems is obviously increasing, so having Android Auto or Apple CarPlay has become pretty common on new-generation models.
7 photos

But on the other hand, it’s no secret that both AA and CarPlay come with a set of limitations of their own, pretty much because they’re powered by smartphones running Android or iOS, respectively.

So it goes without saying that having a fully-featured operating system is quite an upgrade, and this is why many drivers these days replace their head units with aftermarket versions running Android. Of course, this option is limited to Google’s mobile operating system, as Apple’s walled garden only allows iOS to run on its very own iPads.

And yet, this doesn’t necessarily mean that it’s impossible to have the fully-featured iOS running on your car’s dash, and this custom mod from Soundman Car Audio is living proof.

What they did is install a 12.9-inch iPad Pro inside a 2015 Ford F-150, so the owner would get the full iOS experience behind the wheel without making any compromise. This means they get access to all apps that normally run on an iPad, including YouTube (which obviously is a no-no unless the car is parked).

Of course, several modifications to the console were needed, so some buttons were relocated as part of the iPad installation.

“This is another customer dash mod that I just finished. This panel is for a 2015 Ford F150. The customer requested a 12.9" iPad PRO dash kit to be grafted into the panel. We relocated his traction control and hazard switch below the iPad. We also installed an Audio Control volume knob that will control the volume of the audio system,” Soundman Car Audio explain in the video.

The cost of the upgrade wasn’t revealed, but you should be able to get more information on this by reaching out to them directly. 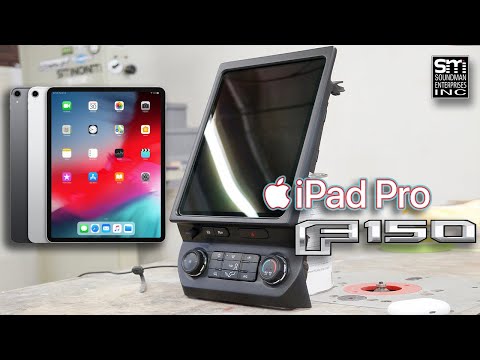