4 Trabant Turbo Quattro Is Not to Be Taken Lightly

5 Scientists Believe Future Cars Could Be Made of Cotton, Hemp and Wood
Up Next

Motorcycle Thief Gets Creative When The Alarm Starts

Can You Guess the Quarter-Mile Time of This Trabant?

Home > News > U-turn
Vlad Mitrache
I don't know about you, but if I were at a drag race with my muscle car and this Trabant pulled right next to me, I would be afraid. Why? It's because I would be convinced it was the ultimate sleeper.
6 photos

That's the only logical explanation, right? Why else would you bring a Trabant on a drag strip if not to humiliate all those drivers in their brightly colored, stripped cars? After the initial fright, though, I would start to get more and more relaxed.

First of all, just look at its wheels. Not only are they ridiculously tiny, but they are also very narrow. Even if a V8 engine were somehow crammed somewhere under that body, it would struggle for traction. And if it were to find it somehow, the car would probably flip over due to the very short wheelbase.

Then there's that engine sound. If it sounds familiar, it's because you might have heard something similar in a chainsaw. It's definitely not a V8. Not even a six. It's a 0.5-liter two-cylinder two-stroke engine that's much better at creating smoke than it is for providing power. We chose the puniest version, but we don't know exactly what model that is, so it might as well pack a 0.6-liter two-cylinder or even a huge 1.0-liter four-cylinder borrowed from a Volkswagen Polo.

Either way, it's safe to say it's not fast. The Trabant was something of a symbol in East Germany prior to the country's unification, and that's because it was the only car most of the GDR (the German Democratic Republic) residents could afford. Some of the over three million Trabants ever produced were also exported to other countries in the Communist Block.

Which is where this particular example comes from. Its owner, a guy from a YouTube channel suitably called "Aging Wheels," had it imported from Hungary, as its registration plates still indicate. He brought it to the drag strip on a platform thinking it would be fun to have a go on the quarter-mile strip. And we reckon he was right.

The driver actually provides a pretty accurate estimate for the pass, saying he'll do it in 30 seconds with a trap speed of no more than 50 miles per hour (5 mph short of the car's top speed). We won't spoil the surprise, especially since there are several funny moments in the video it would be a shame to miss. 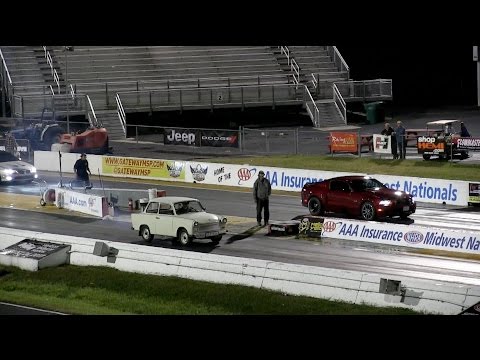