1 Brad Pitt Has “No Interest Whatsoever” in Space Tourism, FYI

4 There’s a Playmobil Movie Coming, and the Porsche Mission E Is in It

On Friday, September 20, a new space epic hit theaters across the U.S. It's called Ad Astra, it stars Brad Pitt, and even has a rover chase on the surface of the Moon.
10 photos

The first reviews for the James Gray movie are already in, and everybody seems to be hyped by how it all turned out. Phrases like "stunning space epic" and "a bit of a masterpiece" are buzzing around the web, previewing a flick that's likely all space enthusiasts will cherish perhaps just as much as Interstellar.

The plot of Ad Astra is simple.

"Astronaut Roy McBride undertakes a mission across an unforgiving solar system to uncover the truth about his missing father and his doomed expedition that now, 30 years later, threatens the universe," it says.

But the way the mission is done is something few of us ever saw on film before.

McBride is Brad Pitt, and he embarks on a mission to find out what happened to his missing father. The backdrop is a not so distant future where wars are fought in an unlikely fashion, the world is actively searching for extraterrestrial life through an organization called Space Command, and pirates are roaming free on the Moon.

And we know that for a fact, as McBride/Pitt has to literally fight for his life as a bunch of no good doers are after what he and his party are in possession of.

Short as it is, the scene depicting how a car chase would go on the surface of a celestial rock other than Earth is one of the best we've seen yet.

It all takes place on a so-called Lunar Path where the temperatures allow for the normal operation of the rovers. A total of three good-guys rovers leave the Moon station only to be intercepted by a number of hostiles.

What comes next is a bitter struggle for survival, with muffled sounds accompanying every action of the participants.

You can have a look at it in the video attached below. 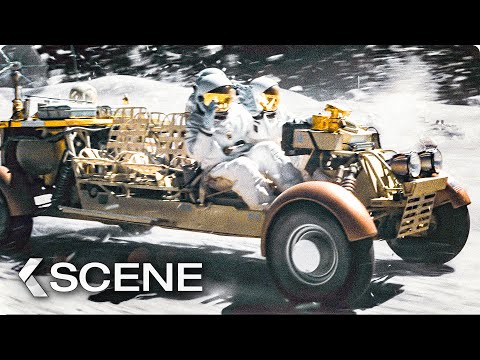