The fact is that people who hate SUVs will absolutely loathe performance SUVs because they essentially build on the exact aspects that made them so despicable in the first place.
6 photos

They are big, brash, loud, pointless, inefficient, showy, but they are... here. And they're not going anywhere, whether we like it or not. Manufacturers aren't suddenly going to stop making SUVs just because somebody says they don't like them, especially since, despite what they claim, some of these people might even own one. Yup, cognitive dissonance is a real thing.

Some might have held hope that EVs were going to change the trend. Surely the switch to electric would put an end to these oversized, brick-shaped vehicles, right? Well, just look at what Mercedes and Audi did with their first true EVs. And then have a look at the Tesla Model X and its ridiculous performance levels - why wouldn't they carry on?

Speaking of performance and SUVs, here are three perfectly good examples from the German iconic triumvirate: Audi, BMW, and Mercedes-AMG. They are the best these brands have to offer in terms of power, acceleration, top speed, or handling, and a simple glance over their spec sheets will instantly show why.

We're looking at the 2021 Audi RS Q8, the 2021 BMW X5 M Competition, and the 2021 Mercedes-AMG GLE 63 S. All three use V8 engines, and all three put out something in the region of 600 hp. Naturally, since it's SUVs we're talking about, they also have all-wheel-drive, meaning all that power has no problem reaching the asphalt in a very efficient way. The result is zero to sixty times that start with a three, which is not something we should be able to say about an SUV.

It's not just about the figures, but the feel as well. These three do a very good job of hiding their size and weight, making it feel as though you are driving a car instead of an actual SUV. Which begs a question: why not get a car, then?

That's more or less the point that Throttle House's Thomas and James are trying to make. They say that by going down the ultimate performance route, manufacturers have had to sacrifice other key aspects of what makes an SUV... an SUV - things like comfort, for example.

They devise a test that will remind everyone of the whole getting tattooed in the back seat that Top Gear did a while back, except here nobody gets mutilated for life. Well, nobody save for James' ego. The best part about the test, however, is it focuses on both the driver and the backseat passenger, offering two perspectives that don't always perfectly overlap.

The conclusion seems to be that the Audi is the more mellow out of the three, the BMW is the most extreme while the AMG offers the best mix of the two. When asked which would be their pick, however, both James and Thomas went for the RS Q8, but only behind choice number four: a regular SUV and, with the money saved, a proper sports car. For the whole story and lots of giggles (and even some lols), watch the entire clip below. 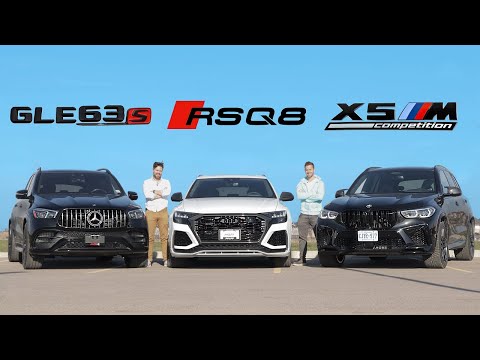