Gabriel Nica
It’s time to take a look at yet another comparison between how two almost entirely different cars stack up against each other, with an acceleration test. The two contenders for the day are a BMW E36 M3 and a B5 Audi RS4.
1 photo
Theoretically, to some extent, the two would be rivals. The RS4 always took stabs at the M3, but the problem here is that they come from different times. The E36 in the video is a pre-facelift model which means it was fitted with the original S50 3-liter inline 6-cylinder engine that put down 286 HP and 236 lb-ft (320 Nm) of torque.

It was vastly underpowered compared to the facelift model that started production in 1995. Using the S50B32 unit with an increased displacement of 3.2-liter in the same inline 6-cylinder architecture, the newer E36 had 321 HP and 258 lb-ft (350 Nm) of torque to play with.

Even so, that would’ve been down on power compared to the Audi as well. The B5 RS4 was built in both sedan and Avant guises and used a 2.7-liter twin-turbo V6 that was good for some 380 HP. Couple that with all-wheel drive and you get a rocket on wheels.

Theoretically, the two are miles apart in straight up acceleration too. At least when new, that is. Audi claimed that its RS4 would reach 100 km/h (62 mph) in 4.9 seconds while BMW posted a 6-second claim for its 3-liter E36 M3.

However, the video below shows us an entirely different face. Even though the four-ringed car should have a distinct advantage even from a standstill compared to the Municher, the contest is a lot closer than we expected.

As a matter of fact, to us, it seems like the M3 is faster to around 150 km/h and then starts losing due to its lack of horsepower and torque. That’s a really impressive feat and it could have a lot to do with the way these two vehicles were maintained over the years. 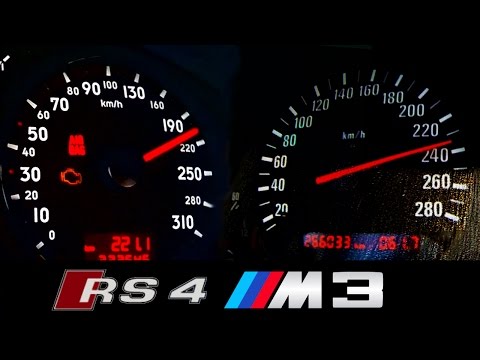