3 US Presidential Limo, from Steam to the Beast

4 The Popemobile: a History of Holy Benzes
Car video reviews:
Up Next

Dainese and AGV to Bring Safety Tech Projects at EICMA 2010

The Second World War will go down in history as the bloodiest, most violent conflict between nations ever known to man. Spanning for six years, the conflict engulfed almost every single nation on the surface of the planet. Each country mobilized armies of never before seen magnitude, with an estimated 100 million soldiers fighting in all during the war. Anywhere in between 60 and 78 million people lost their lives. The effects of the war were felt long after the last bullet has been fired. The war years however may be considered golden years for the world of machines. Never before in the history of man so many great minds began developing more and more effective killing machines. The technical advancements achieved in those years out of necessity will probably never be matched again in terms of variety, applications and sheer numbers. Regardless of your age, you all must have heard somewhere words like Panzer, T-34, Spitfire, Messerschmitt, U-Boat and many more. Not surprisingly, at least in the first half of the war, the most talked about names of the mechanical beasts belonged to German machines. Here however we'll try to give you an insight into a less famous mechanical wonder. One which, as many others, was created out of necessity, but unlike many others, was sent to the trash bin of history by newer, better machines. We are talking about armored trains, or war trains, machines devised primarily for the protection of the troops they were carrying to the front line. Not meant as an assault vehicle (not at first, at least), the armored train's primary job was to get the soldiers safely to the place they would most likely be killed. INCEPTION

Armored trains are pretty much as old as the rail road system itself. The first use for military purposes however took place in the middle of the 19th century, during the American civil war. It was also probably the first conflict when the trains proved their worth in combat, helping General Hooker move 22,000 soldiers for a distance of 1,168 miles (1,879 km) in just seven days. 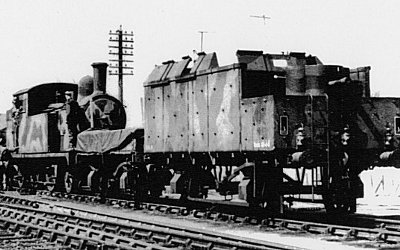 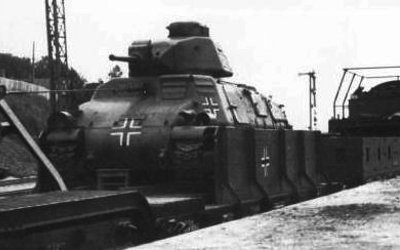 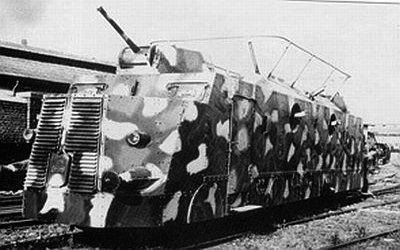 Slowly, the trains and their advantages became obvious to the military. Instead of having them move troops from place to place, however, strategists and engineers begun to devise ways to strike back at the enemy while on the move. The first modern day use of an armored train took place in Baltimore, where such a train was sent out to patrol and fight saboteurs. A more offensive role to the trains will be given by General Robert E. Lee, who asked for a gun to be mounted on a train.

Inspired by their relative success, other countries adopted them as well and used them in many other conflicts. Strangely enough though, despite the fact that these trains will later be associated with the Wehrmacht (German military), the nation which used them the most was Russia.

In fact, pretty much all the countries Germany will end up fighting with, including Poland, had much more experience at building and using armored trains.

Germany however planned a different type of war, one which had little room for limited mobility vehicles. The First World War remained entrenched in the military rigidity of past centuries, creating a type of combat where the soldier would shoot at his enemy from a trench, rarely coming out. This was the perfect type of fight from a logistic standpoint, a type of fight which allowed armies to go to a location and battle their way out without moving too much.

For example, the battle of Verdun, one of the most costly of the First World War, was fought from 21 February to 18 December 1916 mostly with artillery – about 40 million artillery shells fired by the French and German armies – while the troops themselves rarely moving outside their trenches. 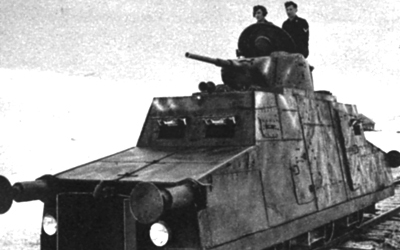 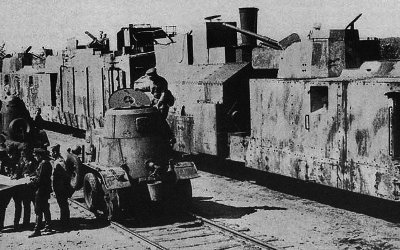 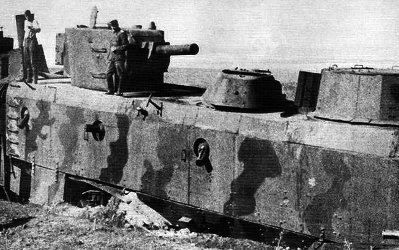 In Germany's case, the attrition war fought at Verdun was the biggest enemy. This is why they came with the exact opposite: fast moving tank armies, which would rip through the enemy's defenses, capture major objectives and then wait for the infantry to clean what they've left behind before moving on.

In such a war, the mobility of the infantry was also essential. Although Germany's Wermacht had plenty of trucks and other means of transportation for its troops in the early stages of the war, it was forced to turn to trains for much needed assistance as soon as they entered Russia.THE TRAINS
Although, in the end, the armored trains made little difference for the outcome of the war, Germany took to building them as seriously as it did everything else in those days. The country's armed forces began building them even before the start of Operation Barbarossa.

In the beginning of the war, in 1939, Germany had seven armored trains, while their opponents, the Poles, had ten armored trains in their service, complete with support vehicles. The trains proved to be a tough nut to crack for German Panzers because they acted pretty much like warships did: they stayed at a distance and fired at the enemy troops in support of their own forces. The trains however, as pretty much everything else in a war, were highly vulnerable to air attacks. The German Luftwaffe picked them up one by one without major headaches. 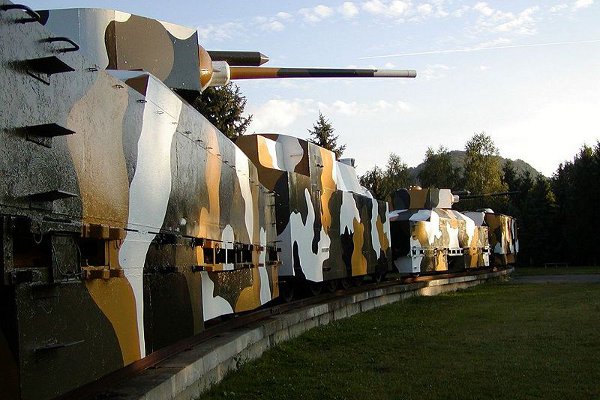 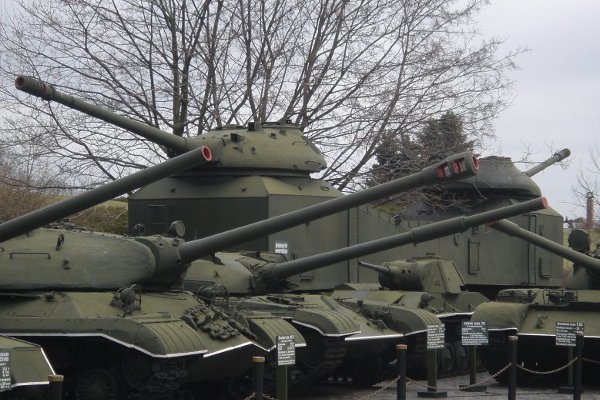 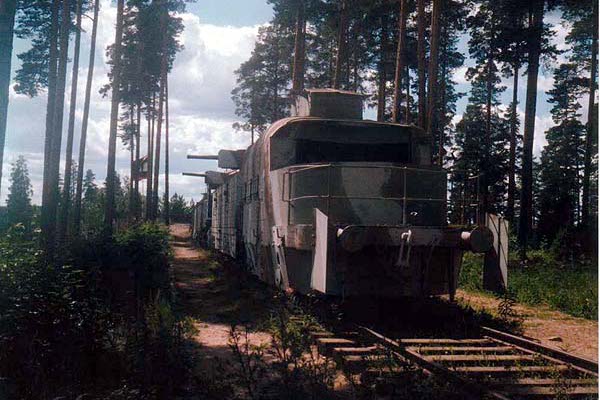 The skill the Poles had in using the trains and the capabilities of the machines caught the eye of the German army. For Operation Barbarossa, the army created six trains, with each of the three army groups, Army Group North, Center and South, to receive two.

Unlike the Poles though, the Germans assigned offensive roles to their trains. They were asked to capture rail bridges in advance of the main forces. Slowly, their usefulness created the need to build more. By 1942, the German army had 29 such trains, with the number to increase further to 55 by the end of the war.

As everything else however, their numbers were way lower than the ones thrown into combat by the Russians. Whereas Germans used the trains individually, the Russians used whole battalions of trains. For comparison, in 1942, the Russian Red Army had 61 train battalions at its disposal.PANZERZUG 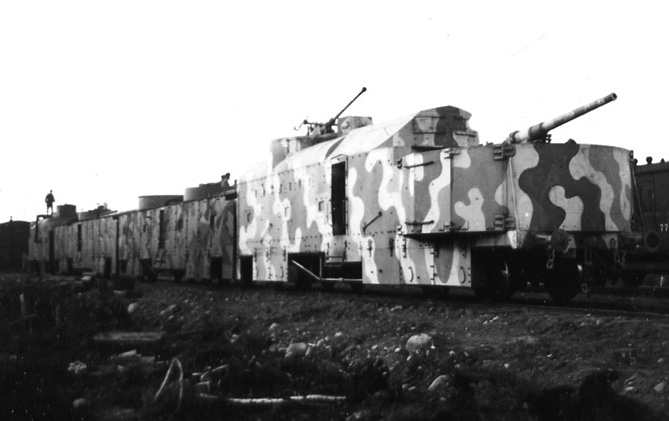 The Wehrmacht referred to its trains as Panzerzug (translated simply as armored train), vehicles pretty much based on the trains built by their enemies. The backbone of the train lineup was the BP42, the first standardized armored train in the German army. It was made up of artillery cars, command car, flak/artillery car and Panzer car. The train was powered by an armored Matador locomotive.

Unlike modern day trains, the ones used for fighting during the war had the locomotive placed in the middle, with an armored car on each side. The train was armed with 7.2cm or 10 cm Howitzer canons and a 2 cm Flakvierling artillery piece. Each train was also equipped with two tank cars.

The BP42 later gave birth to a better version, the BP44, with the main difference being the addition of a Panzerjagerwagen, essentially a tank on rails. RUSSIAN STYLE 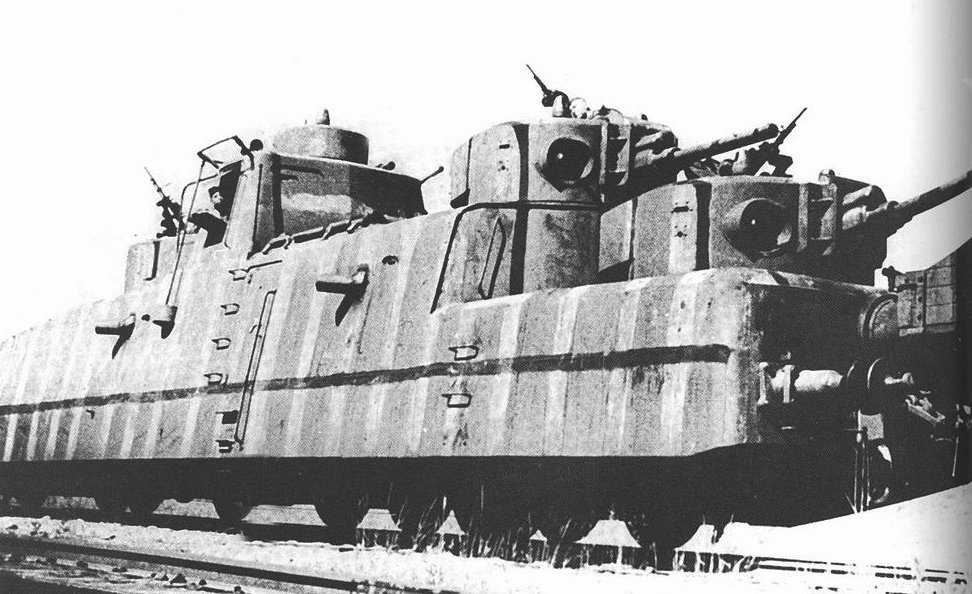 Having much more trains at its disposal than their foes, the Russians also developed more variants of the war trains. The biggest, meanest and most dangerous of them all was the MBV-2. It came equipped with T-28 turrets and F-34 76 mm guns taken from the T-34 tank.

The main threat for the Russian trains however came from the sky, so the Red Army had to come with ways of making the trains formidable weapons against the Stukas. By 1942, almost all armored trains included two PVO-4 antiaircraft defense wagons, complete with two 37 mm antiaircraft guns.

Even so, by the time the Russian forces were advancing towards Germany, most of the trains which served in the battles around Moscow, Leningrad or Stalingrad had been destroyed by their natural predators.DEMISE
As the war ended, the need for armored trains pretty much died with it. Currently, there are few such trains in use and even fewer being used as anything but museum pieces. Although they have left their mark on conflicts throughout the 1960s, the armored trains have not seen action for quite some time.

The rise of far more effective means of transportation for troops, equipment and supplies has pretty much buried this type of vehicle. Also, having contributed to about zero shifts in the course of the war, their usefulness is still considered marginal. For that reason, there are few references to the armored trains and even fewer men and women who remember them. The armored trains, rugged and made of steel, will remain however one of the most hardcore inventions of the warrior mind.