1 New Presidential Limo for Obama Is Called "The Beast"

Ecclestone: "F1 Crisis is About Power"

US Presidential Limo, from Steam to the Beast 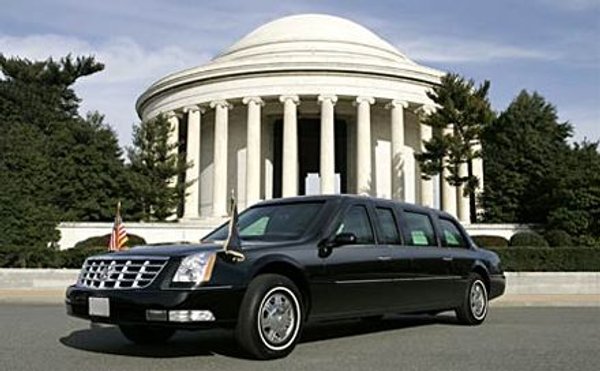 One of the most sought after "shows" on American city streets is the passing of a Presidential motorcade. Today, the simple act of the President going from place to place in a car has become a spectacle in itself, a type of parade if you like (some call it the Power Parade). Since 2001, the motorcade consists of around 35 vehicles, all of them, except the limo, of course, being looked after by the White House Military Office (WHMO).

Of course, this was not the case in the early days of the automobile. As you might have thought, the first means of transportation for presidents were horses or, as the case may be, horse drawn carriages. And, of course, not every car in which a President rode became a presidential limo.

The saga began with the 25th President of the United States, William McKinley. He was the first to ride in an automobile, namely a Stanley (a.k.a. Stanley Steamer), this being about the only contribution he brought to the creation of the Presidential limo myth. 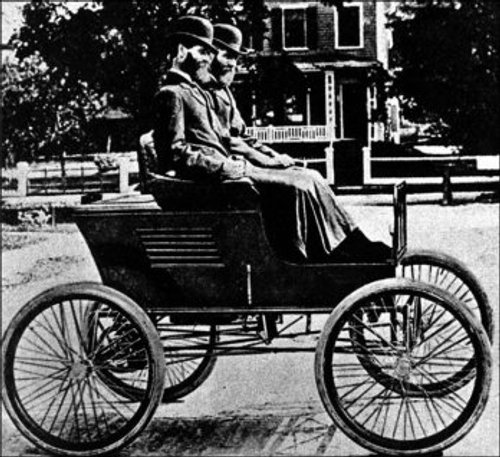 The first government owned vehicle, a white Stanley, came under the term of Theodore D. Roosevelt. As the name suggests (the name of the car, not of the President), it was a steam powered vehicle, with steam being generated in a vertical fire-tube spoiler, mounted beneath the seat. The energy required to generate steam was by means of a gasoline burner. The boiler was held in place by piano wire and had safety valves in place to prevent failure. If the safety valves themselves failed, the boiler was designed in such a way that one of its joints would rupture. The resulting rupture would also put out the burner.

In 1909, what we now call the White House Transportation Agency (WHTA) was set up. It was then called the White House Garage and was not, at first, a militarized agency. 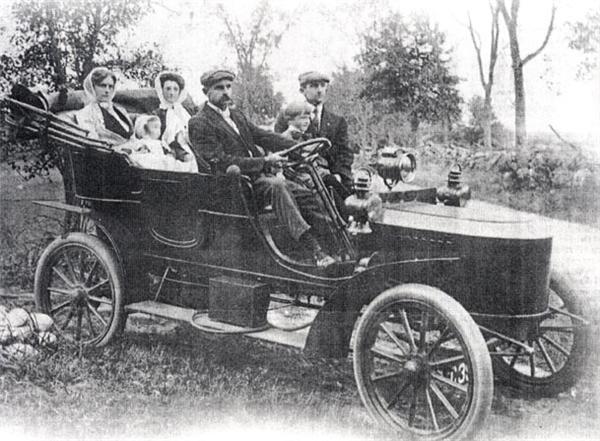 Woodrow Wilson, the 28th president of the United States is considered to be the first president to take a ride in what is now called a presidential limo, as well as the one to set the basis for the modern day motorcade spectacle. The man who in 1906 said cars are "a picture of the arrogance of wealth" became the first president to ride in a Cadillac and the first one to do so in a parade. The birth of the motorcade came during a World War 1 victory parade in Boston.

In 1921, the first president to ride to an inauguration in a car was Warren Harding. The 29th President used a Packard Twin-Six, a car which was considered a high-priced luxury American automobile. Harding's successor, Calvin Coolidge, used a 1928 Cadillac Town car. 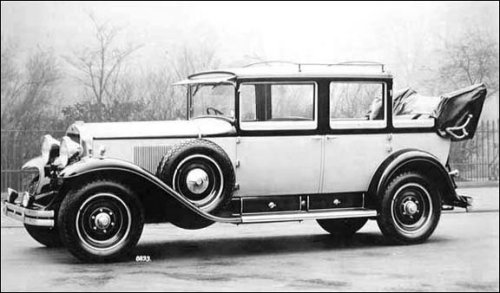 It is necessary to say that up until this point, vehicles used for Presidential travel purposes were in no significant way different than the series production ones. The first steps towards the creation of the purpose-built presidential vehicle were taken in 1938, when GM delivered two Cadillac convertibles to the US government. The two vehicles, called "Queen Mary" and "Queen Elizabeth" (named after the ocean liners) came packed with a full munition arsenal, radios and heavy duty generators. The cars were used by Franklin D. Roosevelt, Harry Truman and Dwight D. Eisenhower.

The first President-attack-deterrent limo came in December 1941. Following the "date which will live in infamy", for the first time, an armored car was used to transport a US President. At that time, federal law prohibited the purchase by the US government of any vehicle which cost 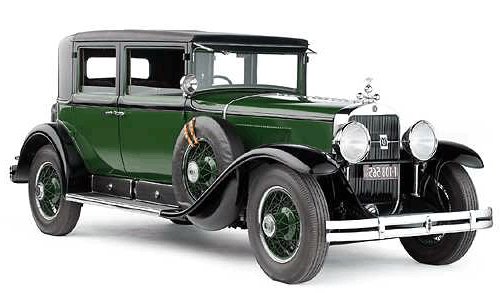 more than $750 and, as you might guess, an armored one would have cost more than that. Besides, events unfolded so fast that when news of the Pearl Harbor attack came, the White House had no armored vehicles in its garage.

The break came when someone remembered that following the incarceration of Al Capone in 1931, his armored 1928 Cadillac 341 A Town Sedan was seized by the U.S. Treasury Department. The green car with black fenders and 3,000 pounds of bullet proof armor was used to transport the President to Capitol to deliver his famous "infamy" speech. 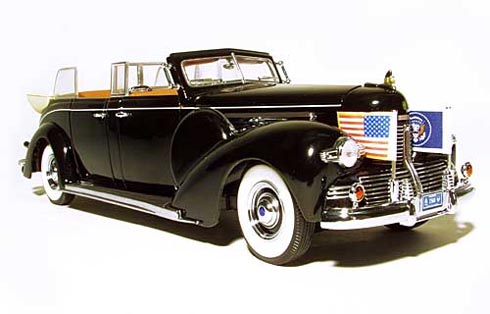 The car was kept in Roosevelt's service until Ford Motor was able to armor and deliver the first ever purpose built Presidential vehicle, the 1939 Lincoln V12 convertible, called "Sunshine Special". The Lincoln joined the two GM Queens in the garage and was used by both Roosevelt and Truman, for $500 a year, until the 1950s.

Eisenhower also used the one of first ever produced Cadillac Eldorado during his inaugural parade in 1953. The car had the first wraparound windshield, a feature later adopted on other new production models. 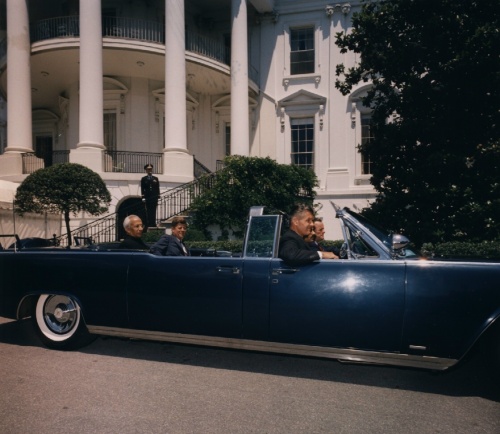 Three years later, GM delivered to the White House the second generation "Queen Mary" and "Queen Elizabeth". These vehicles were smaller than their older sisters, but featured heavy armor and high-tech communication technologies. For the first time, rims were fitted into tires, in case they were shot out. The two new Cadillacs were retired in 1968, after being used by Eisenhower, John F. Kennedy and Lyndon Johnson.

Another car which will live in history is the 1961 Lincoln Continental in which President Kennedy was assassinated. The car, known by the Secret Service as the SS-100-X was equipped with a 430 cubic inch engine, developing 350 horsepower. The car's wheelbase had been extended and was equipped with a snap-together bubble top, a black cover for the bubble, a formal rear top and a stainless steel forward section. None of them were armored.

The car was not retired, as you may expect, but modified and continued service until 1967, when it started performing less important duties. The Lincoln got armor plating, a permanent sedan roof, a new interior, air-conditioning system, electronic communications equipment and a bulletproof glass. In 1978, the car was decommissioned and is now displayed at the Henry Ford Museum.

President Johnson used for his travels three 1965 Lincoln Continental Executive limousines, two for him and one for Robert McNamara, the Secretary of Defense. His successor, Richard Nixon, added a 1972 Lincoln Continental, powered by a 7.5l V8, mated to a C-6 3 speed automatic transmission. This model was used by Gerald Ford, Jimmy Carter and Ronald Reagan. It is the same car which witnessed the assassination attempt on Reagan in 1981. In 1983, Reagan received a 1983 Cadillac Fleetwood limousine. 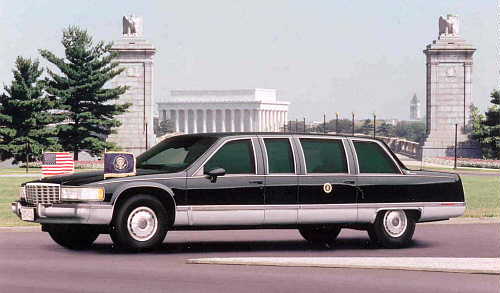 GM delivered a Presidential Series Cadillac Fleetwood Brougham to President Clinton in 1993. The car was powered by a 7.4l Chevrolet V8, mated to an automatic transmission. Unlike previous models that typically were Cadillac cars adapted and modified by independent limousine companies, the 1993 Presidential Brougham was designed, developed and manufactured totally within General Motors and Cadillac. The car became, in 2009, the last Presidential limo to be placed on public display. As of this year, decommissioned limos will be used by the Secret Service for testing purposes. And we don't mean test drives... 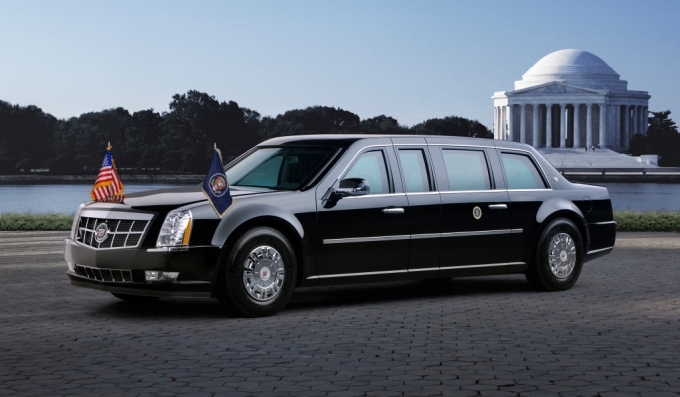 In 2001, George W. Bush got a Cadillac DeVille, replaced in 2005 by a Cadillac DeVille Touring Sedan (DTS). The latter is a custom built (by Centigon), armored version of GM's Cadillac DTS. It was used during the inauguration parade of Bush's second term and is still in use as an alternative presidential limo.

Today, the limo of choice for President Obama is the Cadillac Presidential Limousine, a.k.a. the Beast (GM says it is the first car not to have a specific model name). The car, a combination between a Cadillac and GMC truck, is more upright than its predecessor, even if it occupies roughly the same overall footprint on the road. As you may have guessed, many of the car's features are secret.