3 This Boeing Spaceplane Could Have Been the Ultimate Space Freighter, Exists Only Here

5 Nuclear-Powered Airliner Can Carry 600 Passengers at Mach 6, But Only in Sim
Coverstory

Daniel Patrascu
America’s space exploration program is without a doubt the world’s most successful. Even if in the beginning, in the 1960s, America was beaten to space milestones by what was then the Soviet Union, the nation didn’t give up and has been ever since at the forefront of humanity’s push beyond the borders of our planet.
8 photos

The successes achieved with the Apollo program, or the Space Shuttle, or with the many pieces of hardware sent over to neighboring Mars would have not been possible though, without a long list of failures. Failures, and concepts that never came to be.

As we speak, NASA is trying to figure out what is wrong with the Space Launch System (SLS), so that the rocket could take its rightful place as the enabler for the new Moon exploration program, Artemis. But even before the SLS came to be, America was envisioning a rocket that could become an alternative to the Space Shuttle.

Penned in the 1990s, the idea was named National Launch System (or New Launch System), and at the request of that era’s administration, NASA, Lockheed and McDonnell Douglas were asked to perform a case study for such hardware. The idea for the National Launch System (NLS) quickly grew into a family of vehicles, ranging from the small NLS-1 to the massive heavy-lift rockets at the other end of the spectrum.

As you might have guessed, making an entire family of vehicles was not to be cheap, and that meant that by 1993 the program was canceled. The NLS, not a single one of them, never got to fly, and America was deprived of what would have probably been a very successful line of space vehicles.

It never flew until now, that is, as thanks to an animation specialist called Hazegrayart, a heavy-lift version of it was brought to life in a four-minute-long clip, which is available below this text. 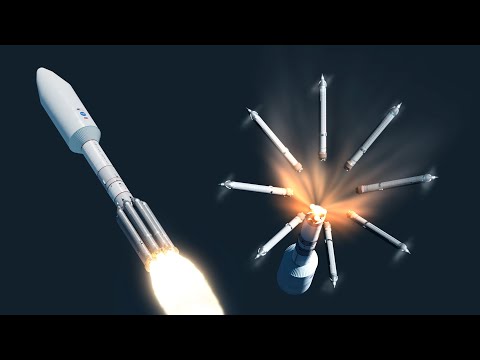