2 Nuclear-Powered Airliner Can Carry 600 Passengers at Mach 6, But Only in Sim

3 Star Raker Spaceship Concept Could Have Changed the World, CGI Video Shows How

This Boeing Spaceplane Could Have Been the Ultimate Space Freighter, Exists Only Here

At the time you’re reading this, the name Boeing has somewhat fallen out of grace with space enthusiasts. One of the pillars on which the American space exploration industry was built, the company is now having a hard time taking the Starliner spaceship off the ground and has already botched two launches of the thing.
20 photos

Now, failures in this business are not uncommon, and quite the opposite, they can be beneficial to the industry as a whole. It’s the fact that Boeing doesn’t seem to be going anywhere with the Starliner, shortly after the 737 Max debacle, that has made the American public pretty angry with the company.

Chances are Boeing will recover from this low in its history, but that may take some time. Until it bounces back, we’re left with what it has done well over the years, but also with projects that never made it into production, brought back to life through modern animations.

Part of the latter category is the so-called Boeing Space Freighter, an idea from the golden age of space exploration, the 1970s. The hardware, designed as a two-stage winged vehicle capable of carrying both humans and cargo, never came to be and was relegated, like many other similar projects, to the history books and alternative realities.

Designed to be reusable, the plane would have been able to carry to space a payload of 420 tons. It took off with the help of stage one rocket engines powered by liquid oxygen and methane, and then was able to move courtesy of LOX and hydrogen engines located on the second stage, the one that reached space.

The animation video below, put together by specialist Hazegrayart, envisions the Space Freighter taking off from an offshore rig, where it would have been transported by means of large ships. After its job would have been completed, a return similar to the one of the Space Shuttle would have followed, as seen in the video below, the only place this spaceship exists. 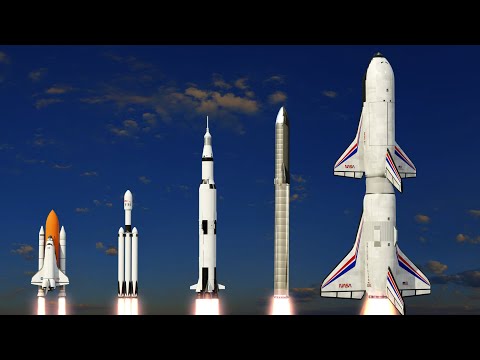