1 How to Ride in a Group and Why

3 How to Spot Fake Riding Gear

5 7 Reasons Why We Crash in the Spring
Car video reviews:
Coverstory

A Quick Guide to Motorcycle Rake, Trail and Offset, Part 1

It’s really hard to find two motorcycles which feel the same during a ride, despite some of them being exceptionally close as far as the outer attire is concerned. Most manufacturers have their own secret recipes for making their bikes feel or behave in a certain way, and these designs are protected by intellectual property rights and patents.
1 photo
Part of the handling characteristics of a motorcycle are dictated by the constructive particularities of its frame and suspensions, and the purpose of the present guide is to provide a quick introduction of three of the most important aspects that influence the handling of a bike. While the present piece may seem a bit scarce in engineering data to riders and mechanics with tons of experience, the guide is targeted to newer riders and its goal is to help them get the basic notions.Rake, trail, offset
These three are the most important concepts governing the rideability of any motorcycle. The offset may be absent in certain models, but where it is being used, it helps to adjust the riding characteristics of the bikes in ways otherwise hard to achieve, if not impossible at all.

Motorcycle handling is a complex equation, and it involves geometry and weight distribution, alongside the good-old balance and actually learning how to ride. However, regardless of the riding expertise of a certain fellow, he or she will happen to throw a leg over a machine with surprising handling. Now, the surprise may be a positive one, but it’s more than once or twice when riders seem to be unable to get along with certain machines… simply because of the way their handle.

The engine type and figures, coupled with the riding surface, tires and other factors are obviously are all accounting for a bike’s handling, but the generic layout or foundation is represented by the very design of the motorcycle: its rake angle, trail and if it’s the case – the offset.What is rake?
A motorcycle’s rake may sometimes be referred to as the “fork angle”. Such a name is not exactly the best one, because the rake is not a variable calculated in relation with the fork or fork legs, but to the steering head. To eliminate any misunderstanding, we’ll refer to it as rake or rake angle. 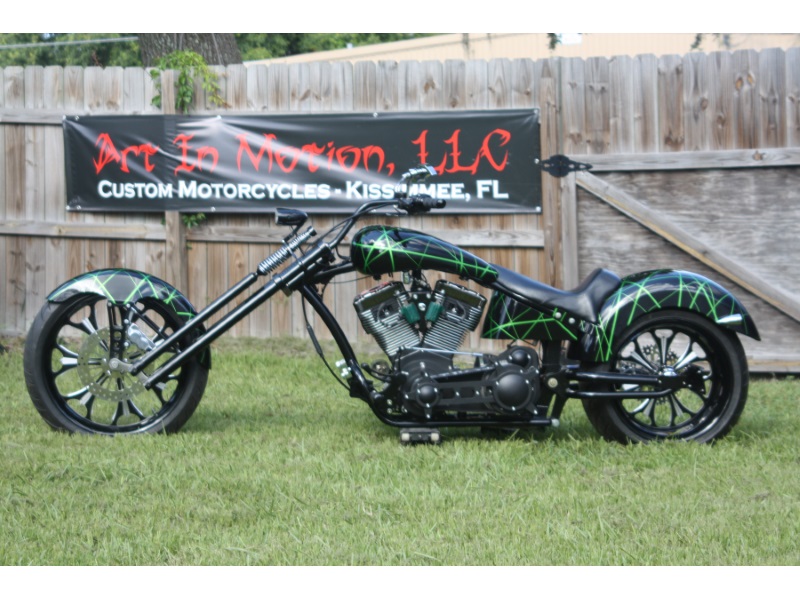 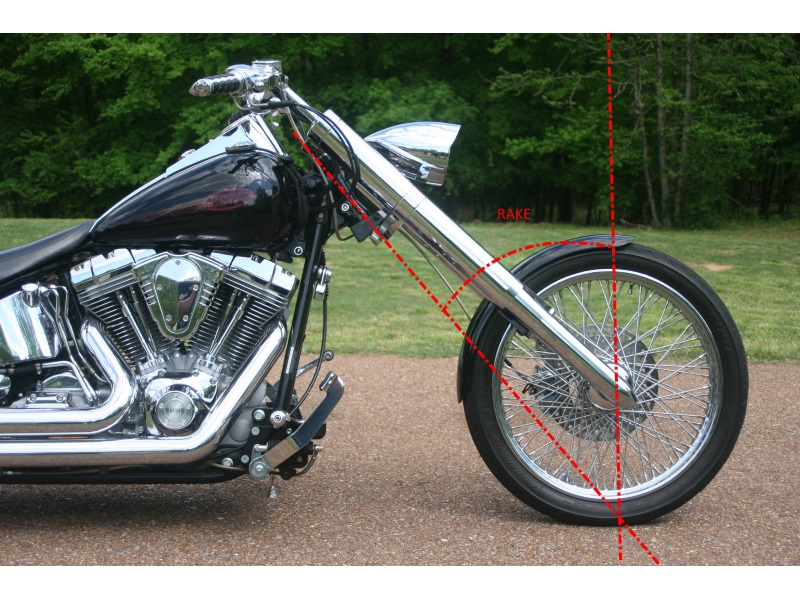 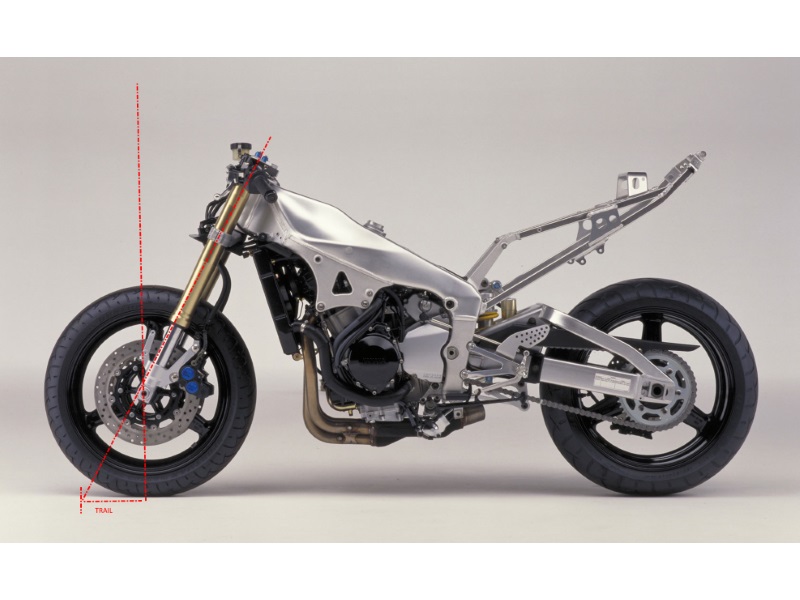 The angle between these two is called the rake or rake angle, and it has a crucial role in a bike’s handling characteristics. It is normally accepted that the responsiveness of a motorcycle’s handling is inversely corresponding to the rake angle values. Namely, the smaller the rake angle, the more agile a bike is. If you take a look at a cruiser/chopper and a superbike, you’ll quickly notice the rake difference between the two.

Sport bikes need to steer very quickly and come with a smaller turn radius and wheelbase (read more on wheelbase below) for swift directional changes and fast tracks around sharp bends. On the other hand, you’ll also notice that many high-performance sport bikes are also equipped with steering dampers… because of their very sensitive nature when it comes to changing direction. High-speed stability is dramatically improved with the presence of a steering damper in this case.

On the other hand, most cruisers, choppers and baggers/tourers have a much bigger rake angle straight from the factory. Larger rakes favor high-speed stability, even if it is detrimental to the cornering capabilities. The motorcycle-building tradition has coined the longer fork legs and wider rake angles as “classic” elements, pretty much as it did with chrome. Still, regardless of how cool a bike looks, the raked-out fork will be a nightmare if you’re traveling on really winding roads or plan to use the bike as your primary city slicer.

Standard (factory) rake angles can vary from generic values around 24 degrees to 35 degrees, with certain manufacturers, such as Harley-Davidson having fixed values for certain line-ups, thus being sure their bikes maintain a consistent handling feeling across model years.

If you are looking for a more visual way of putting things, rake describes how fast the bike will follow the movement of the front wheel. A small rake means an immediate, response. Some even say that smaller rake angles can be compared to having the steering (front) wheel “closer” to the bike. The rake angle does influence the distance between the frame or neck and the front wheel in bikes with zero (or zero-ish) offset.

Pushing things to a more extreme representation to help newer riders understand rake more easily, we could imagine a bike with a very, very long fork and a huge rake. Turning the front wheel to either side does indeed make the front of the bike start to move in that direction, but it will take a long time and a huge amount of space until the rider and the rest of the bike follow in that direction.What is trail?
While rake is a very easy to understand notion, getting the idea behind the trail concept need a tad more visual imagination. The trail of a motorcycle is also a numeric variable (number) and it is expressed as a measure of length, in inches or centimeters, depending where you are on the planet. With an equally important role to play in the handling and stability of a motorcycle, the trail is inherently linked to the rake.

The trail of a motorcycle is defined as the distance measured form the center of the front tire’s contact patch to the ground and the point where an imaginary line passing through the center of the headstock axis meets the ground. In bikes with no offset, the rake and trail are varying proportionally: the bigger the rake, the bigger the trail. Offset is an engineering solution to alter the relationship between the two and we will discuss it below.

If you want, the trail can be compared to a sort of buffer zone as far as the movements of the handlebars are concerned. In bikes with bigger trail values, the front wheel acts almost like a caster: the longer its supporting arm, the stronger its force when trying to realign with the direction of travel. And yes, you guessed it – the bigger the steering effort needed to turn the front wheel and maintain it on a new direction!

Just like the rake, a bike’s trail has a crucial importance on the handling, with bigger trail values favoring stability. However, the excessive trail brings handling back into the less stable area. With all these measurements being intertwined in the dynamics of a motorcycle, bike designers and engineers are always trying to find the best compromise between the two, and reach the ideal combination for a certain purpose. 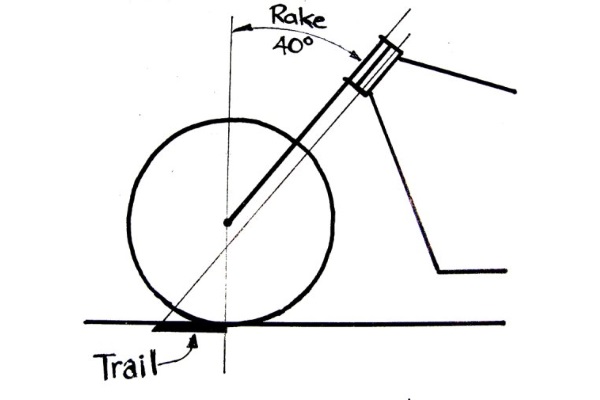 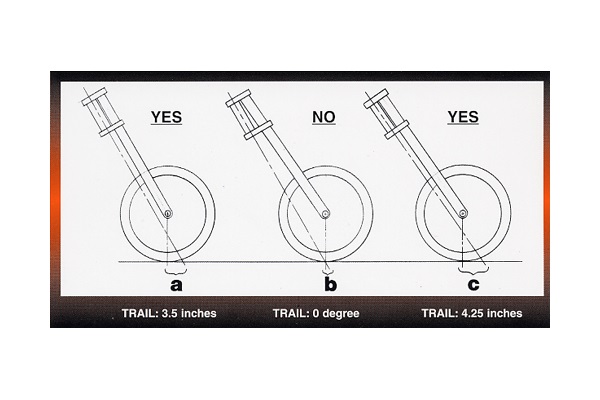 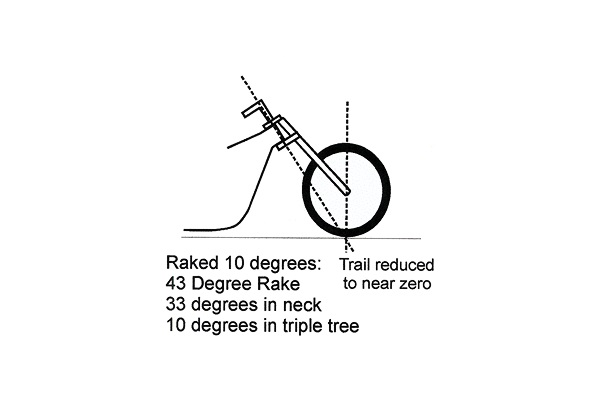 Still, rake and trail alone are not enough to find the optimal stability of a motorcycle. The rest of the chassis figures, the type of suspensions being used, the load of the bike and the suspension settings are all parts of a much bigger picture which is rather hard to understand. The understanding of dynamics and stability for both bicycles and motorcycles is still incomplete, and putting everything in one single phrase is still impossible.

Altering the architecture of a motorcycle can even result in a negative trail, and this is definitely one thing you don’t want. A negative trail is the exact opposite of the caster wheel. To understand the importance of trail, you can head over to your nearest supermarket. Their trolleys/shopping carts have at least two casters, though most of them have four.

Grab one, align the casters so that their pivot arms are facing towards the front and try to push the cart. Now you’re looking at negative trail, and not only will they oppose such a move in the first place, but fractions of a second later they will return towards you. By now, you’ve probably guessed that pushing a trolley while maintaining the pivot arms pointing to the direction of travel is impossible. So with negative trail, riding a bike is really close to impossible, isn’t it?

Catch up with autoevolution next week for the second half of the “noob’s guide” to Motorcycle Rake, Trail and Offset.