How to Ride in a Group and Why

Florin Tibu
Possibly one of the most rewarding experience is that of one man or woman aboard his or her machine, and the open road, but riding with friends, club fellows or even together with several guys you simply meet on the road can be equally fun and provide you with great memories.
1 photo
Nevertheless, riding in a group comes with some particularities which also require a different level of awareness and involve a completely new approach to safety. That is because riding in a group, pack or formation leaves the motorcyclists with limited options as to the speed they are traveling at, position in the lane, route, and last but not least, room for slowing down, stopping or swerving past obstacles.

Riding in a group also requires a certain level of discipline and skill, as mistakes made while on the move can affect multiple members in the group, especially those behind the “problem.” A group of motorcycles, when traveling in an organized manner is also more visible and less prone to having its components involved in crashes. So, here are some tips for riding in a group and some short explanations for such pieces of advice.

Create the ride. Before heading out for the horizon, it’s very good that all the guys in the group know what to expect. This includes the approximate size of the group, generic route, stages (if applicable), generic weather conditions along the route, and other similar details.

Such details are extremely important especially if you happen to travel with beginners, people who are afraid to ride in the wet, who have poor sight at dusk or dawn or who are terrible at riding at night and so on. A short briefing is one of the best ways to learn about some of the things which might otherwise hamper your trip. 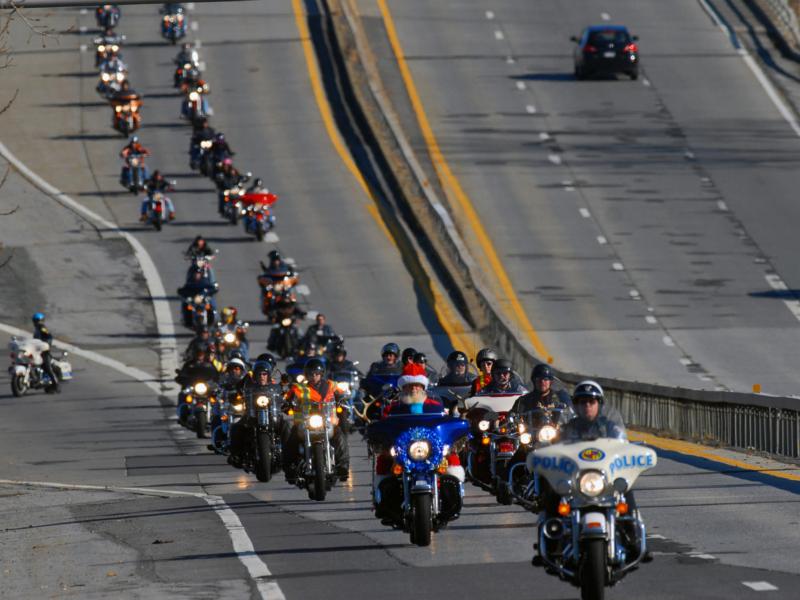 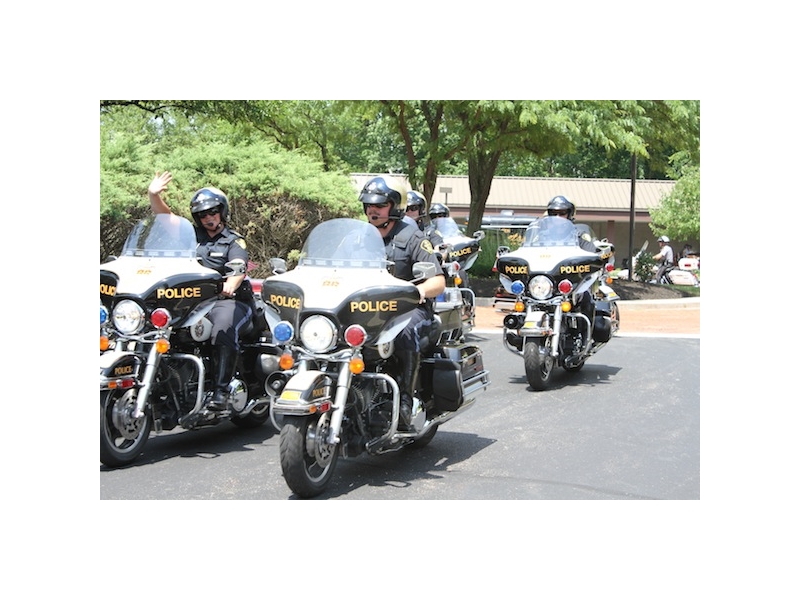 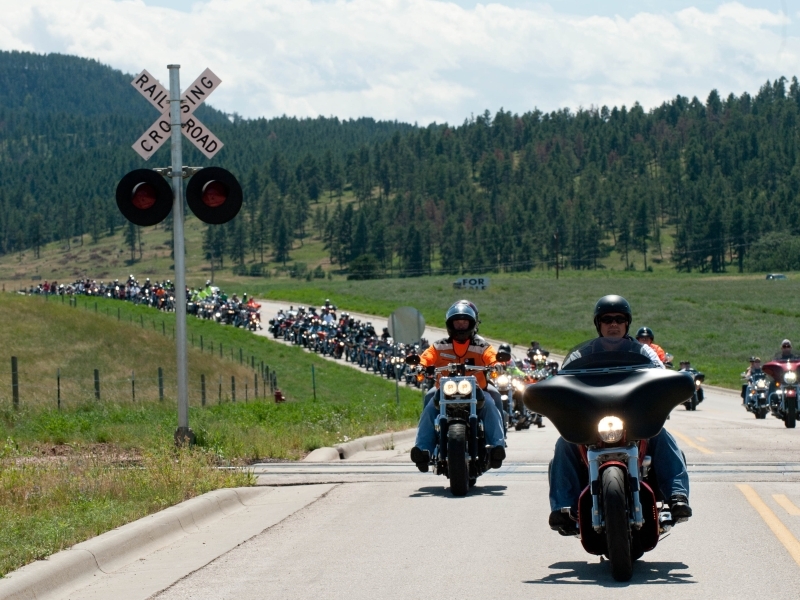 At the same time, you should also discuss average speeds, more difficult portions of the road, pit stop policies and all. You’ll grow to hate the one who takes an infinity to finish their cigarette or who has to wait for the coffee to cool down to a certain temperature and so on. It’s better that everyone knows that they’re not exactly leaving on a cruise ship and certain things are harder when on two wheels.

Ride prepared. Whether out for a short ride or heading for remote places in a two-week-long vacation, riders must be well-prepared. That is having checked the running condition of their machines, having a full-tank (unless all agree to refuel at a certain gas station at the start of the ride), having all the gear they need for the ride, after having checked with the weather. Toolkits and first-aid kits are also mandatory, especially for longer hauls.

Preparedness is exceptionally important because being forced to wait all geared up in the summer heat for a guy who has forgotten something at home is really unpleasant and unfair. At the same time, if you run into rainy weather, having one or more riders who are not prepared to fight the moisture (i.e. don’t have rain gear) will wreck your trip. And they could catch a severe cold, which would also wreck your trip.

For a comprehensive round-up to must-have things while on a bike trip, please check this autoevolution how-to guide.

Reasonable groups. Keeping the group to a manageable size is one more smart idea. Unless you’re on a parade or are riding in a very large bike organization pack, maintaining the group to 5-7 bikes is one of the most efficient formations. This allows easier passing to get in front of other vehicles, reduces the risk of a crash involving multiple bikes while not diminishing the fun factor.

The ease of passing other cars is important especially when riding off the highway. Due to the road configuration, at times only a limited number of riders can get past a vehicle, sometimes this number being reduced to 3 or even 2 bikes at a time. This means that the large group will be fractioned anyway, so desperately trying to stay all together is really useless and can lead to crashes.

The 2-second rule is best applied in relation to the rider in front, as well. With riders alternately in the left and right halves or thirds of the lane respectively, the staggered formation also provides better visibility ahead. The staggered formation must, however, be changed to single file on winding or excessively narrow roads.

Avoid riding abreast. Riding two abreast or side by side is not recommended because it reduces the “space cushion” and limits the room needed for evasive maneuvers unnecessarily. At parades, such a riding formation may be a suitable one, especially as the parade speeds are usually much lower than casual riding, thus the risks being also reduced significantly.

The last thing you want when riding side by side is having to swerve past an obstacle, be it a pothole, rock, oil patch or even a falling, or already fallen rider. You’re most likely to crash into the rider next to you, adding to the overall trouble, and that’s bad for your ride.

Check your surroundings. All those riding in a group should periodically check with their mirrors to permanently reassess the shape of the formation. Some chaps may slack a bit, so if you see them falling behind, you’ll know to ride a tad slower and allow them to catch up. At the same time, being on the lookout is also great to spot potential problems, from troubles behind to guys riding too close.

Maintain speed, maintain position. It’s not rare that accidents occur in a group because of riders changing positions without signaling their intention or doing this before they can be sure the ones behind them got the idea. When riding in a group, even switching the side of the lane could be signaled with your blinkers, just to make sure everyone is prepared.

Riding at the speed of the group is one more recommendable piece of advice: it will allow you to keep your position in the pack and not to be a troublemaker for the guys around you. I’ve marshalled a lot of parades and similar group rides and had my fair share of guys crashing because they felt like keeping in line with the rest of the fellows was not worthy of them.

A well-organized motorcycle group is a homogenous formation, which acts as a single-bodied entity in most of the cases, even when it changes shape, speed or direction.

Heed the signals, pass the signals. Even though autoevolution will have a dedicated piece on the signals used when riding in a group and their meaning, this short guide must stress once more the importance of being aware. Riders in the front of the pack have the best visibility and will often send messages to the rest of their companions. Some of them have a critical importance and may spare the riders many a hard time.

Likewise, it’s recommendable to pass the signals toward the back in due time, helping the other guys stay safe. If the guys in the front start signaling before a pass or a junction, you should do the same.

Don’t panic, don’t be a stuntman. If you get separated, it’s no use panicking. Your absence will be noticed, and unless you’re riding with scumbags, the group will wait for you to catch up. Try to keep calm, remember the planned route, and slowly catch up. Speeding like a madman or beyond your skills can and will lead you into trouble, with the cops or with the doctors. Not worthy.

As for the funny tricks when riding in a group, the Youtube and other social movie websites are literally oozing videos of fellows being a tad to bold and coming down the nasty way. Always remember that if you go down, other may as well, and if anything, try to put yourself in the scenario where the guy in front of you is acting stupid and you hit the deck. Not the nicest way to end a ride, is it?

Take care of the new guys. Mixing highly experimented riders with new ones requires the former to adapt their riding to the latter’s. This applies to pretty much all types of bikes and is a good way to help the new guys gain experience by following a good example. Having them ride beyond their skills is stupid and means exposing them and the group to unnecessary risks.

In the end, riding in a group is also about having two-wheeled fun, and as long as you heed these guidelines and the prime safety objective of not hitting the bike in front of you, you should be just fine and have another nice story to tell your grandchildren.