1 We Never Knew a MINI Could Sound Like This

5 MINI Refreshes Paceman for 2015
Car video reviews:
Up Next

At the moment, the official world record for a front-wheel drive car on the Nurburgring is held by the Megane RS 275 Trophy-R, a car that was basically designed for this exact purpose. In the race to take the title from Seat’s Leon Cupra, the French engineers created this little lab experiment just to show the Spanish who’s boss.
1 photo
If you ask us, the Cupra is the car to have because, unlike the Megane, it managed to post the 7:58 lap time in standard trim. Basically, any car you drive off the lot is theoretically capable of this feat. The Renault, on the other hand, was stripped down and modified, making it basically impossible to use on a daily basis.

290 HP MINI JCW showed them both how its done

Recently we stumbled upon an even more mesmerizing performance. A tuned MINI JCW done by the guys from Schirra Motorsport managed to post an even better result on the Green Hell. This one was 10 seconds faster than the Megane. And get this, the driver was a journalist.

Sure, it’s Christian Gebhart that is known around the world for being on par with various race car drivers but still, he’s a journalist. He took up the challenge and set an unofficial record, due to the tuned character of the car.

Under the bonnet of the hatch lies the same 1.6-liter 4-cylinder engine that comes as stock on every JCW but the power it makes now was raised to 290 HP. That’s just the tip of the iceberg, though as the MINI was prepped for this endeavor with plenty of parts to make sure it copes with the task at hand.

The car also received a Drexler limited slip differential, KW coilover suspension, Recaro Pole Position seats as well as other weight-reducing parts that drove the overall weight of the little monster down to just over 1 ton (1,005 kg/2,215 lbs). And yes, it's still road-legal!

It all sounds great and the video will show you that it’s also crazy fast but considering the vast amount of trouble the tuner had to go through, we’d still take the Leon. Just saying!

PS: will Renault take up the challenge again? 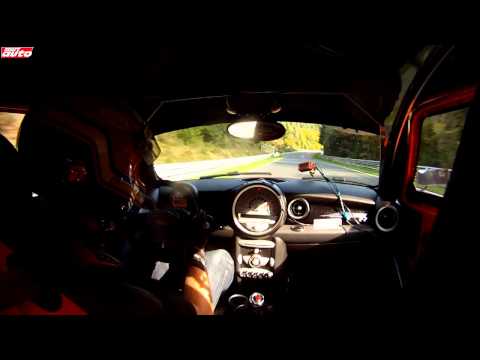