5 21-Year-Old YouTuber Is Driving a Lamborghini Aventador, Had It Wrapped in Orange
Coverstory

Home > News > Artists
Ionut Ungureanu
They say money corrupts, turns people’s lifestyle upside down. Whether or not that is true is a matter that concerns writers like Beau Willimon, the author of House Of Cards, the book on which the famous TV series were based on. However, judging by the effect success and fortune had on Olakide Olatunji, a 21-year old game commentator on YouTube that has millions of subscribers, we’d say it’s true.
1 photo
Sure, his real name might not ring a bell, but we’re pretty sure KSI does. This is the nickname he runs by on YouTube, where millions of watchers follow his every video. Millions of subscribers equals with thousands, if not hundred of thousands of dollars earned. This is exactly how he managed to buy a new Lamborghini Aventador. The sportscar he then took straight to the tuning shop where it got a purple, Tron Legacy look. No problem with any of these so far.

However, we find ourselves forced to write about the celebrity-aspiring fellow once again, since he might turn out to be some sort of a madman. Why? Well, we just had the “pleasure” to watch the new video he did featuring rapper P Money. Other than the fact he basically created this song only to brag about his new Lamborghini, he literally loses his temper at some point.

At some point mister KSI here goes all fifty shades of hysteria while violently shaking his hands and eventually his entire body. Not that we actually listened to the whole song, but it seems his reaction has something to do with haters who just won’t leave him alone. Honestly boy, an anger management class seems like the right step to take before you do something bad to yourself!

As to the peculiar wrap, it's a fine job folks over at London-based Yiannimize auto shop did. The car is finished in a purple chrome Tron style scheme with orange accents and purple neons embedded in the car. Like we said, there’s nothing wrong with the car itself, rather with the person driving it. 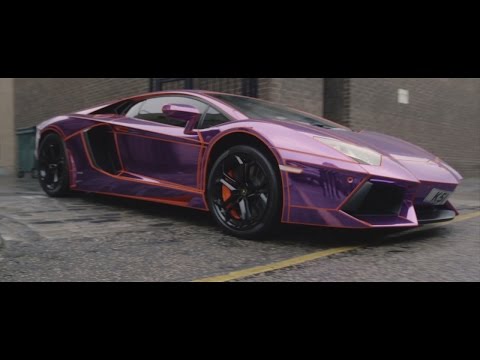