4 2017 Mercedes-AMG GT R Teased, Leaves Its Mark on the Nurburgring

The 2017 Mercedes-AMG GT R is the first ever AMG model made to look like a venomous snake. It's also the first one that comes with rear-wheel steering and promises to give vertigo to its passengers when driven at the limit on the Nurburgring Nordschleife.
31 photos

Sadly and despite our initial predictions, there is still no official Nurburgring lap time for the new GT R, but we still have a feeling it won't be a slouch.

On the other hand, the green monster has 275/35 ZR 19 forged wheels on the front axle and 325/30 ZR 20 on the rear axle, all of them being shoed with Michelin Sport Cup 2 tires. Those alone should cut a lot of seconds from your usual Nurburgring time with a Mercedes-AMG GT S, for example, but the novelties don't stop there.

The GT R is the first ever production AMG model that comes with a rear-wheel steering system. At speeds up to 100 km/h (62 mph), the rear wheels turn in the opposite direction compared to the front ones and up to a 1.5 degrees angle. Just like in other vehicles with rear-wheel steering, this is results in a smaller turning circle and increases handling on tracks with narrower corners.

At speeds higher than 100 km/h (62 mph), the rear wheels start turning in the same direction as the front ones, thus virtually lengthening the wheelbase and increasing the car's stability.

Another novelty is the introduction of active aerodynamics, which, like rear-wheel steering, seems to have been introduced as a shout out to the Porsche 911 Turbo S (991). For those who have forgotten or simply didn't know, Mercedes-AMG poached a chassis engineer from Porsche to hone the GT's handling before it was introduced.

Underneath that gaping grille, there is a retractable aerodynamic wing that can move up or down and increase the suction effect of the air flow going underneath the car. Apparently, that carbon fiber component alone can reduce front-axle lift by 40 kg (88 pounds) at 250 km/h (155 mph).

A set of louvers behind the 300 SL W194 grille can be electrically closed or opened to either improve engine cooling or aerodynamics. Despite the increased downforce, much wider tires and body, the GT R is actually more slippery and has a better drag coefficient compared to the GT and GT S.

Last, but certainly not least, Mercedes-AMG has also developed a nine (9) step traction control system, which is derived straight from DTM. The first level is apparently the most 1984-like and allows you to drive safely in the wet, while level 9 allows you to completely roast those ultra-wide rear tires.

The only bad news comes in the weight area. Despite what everyone was expecting, the GT R is only 15 kg (33 pounds) lighter than the GT S, so most of the improved track performance will come from the extra power and the upgraded aerodynamics.

The 2017 Mercedes-AMG GT R will go on sale in November, but the European Market launch is expected to happen in March 2017. There is no word on pricing yet, but it won't be cheap. 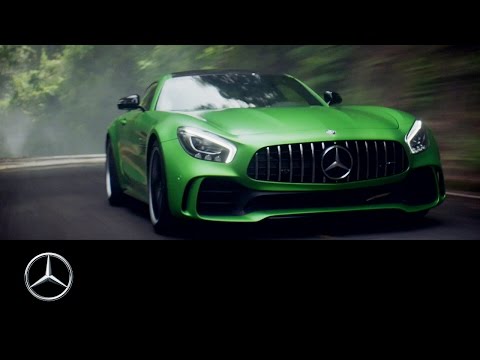