5 The 2017 Chevrolet Bolt Is a Good Electric Car, But Also a Big Lie
Coverstory

Vlad Mitrache
Back when GM first started talking about the Chevrolet Bolt, Tesla fans were quick to dismiss the possibility of it ever coming to the market in such a short timeframe and with such decent performance figures.
1 photo
But Tesla fans tend to do that with almost any new EV that doesn't wear the "T" logo, so they're not exactly a valid point of reference. However, late last year, even they had to admit that General Motors had pulled it when the first Bolts started heading to their new owners.

Even as soon as the press launch of the battery-powered hatchback, the journalists present there managed to get impressive mileage out of the Bolt, proving its 236-mile EPA rating is real, if not even a bit pessimistic. And while you won't see it on drag strips (even though you can see it here destroying a Volkswagen Golf GTI), the 2017 Bolt is no slouch.

It also gets plenty of useful and smart tech, like the "Hill Top Reserve" option which allows you put a cap on your charging at home if you know you'll be going downhill on your way to work, allowing the energy regeneration system to top off the batteries instead. That's smart and shows General Motors has put real thought into creating this model.

Despite all that, the Chevrolet Bolt is still the "poor man's EV" - or rather the "dull man's EV." Why exactly is that? It might have to do with its styling, but while it's definitely conservative, the Chevy is by no means an ugly car. It has to be something else.

Anyone who has any clue on what the whole thing with EVs is all about will have figured it out. It's the badge sitting on the car -more to the point, the company behind it. General Motors could have led the way for electric cars back in the mid- to late-nineties when it came up with the EV-1. Then, despite proving successful, the funky-looking car was scrapped; deleted from history.

EV enthusiasts don't forget and, even more importantly, don't forgive. GM showed its true colors back then, and now when the electric powertrain is making a comeback, it wants to jump on the bandwagon as if nothing happened.

Doug DeMuro reviews the 2017 Chevrolet Bolt and, after failing to find anything wrong with it (apart from the chairs), he comes up with essentially the same conclusion: Tesla represents the disruptive power that wants to prove wrong those that killed the EV-1 prematurely, while GM was the executioner. Nobody likes the child of an executioner, with the fans of the victim even less so. 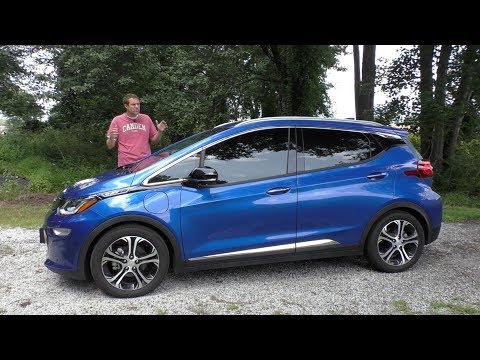