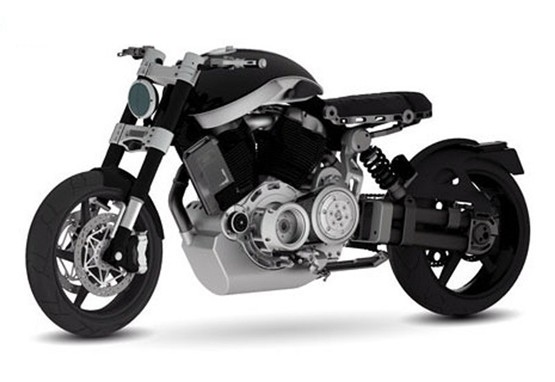 Initially scheduled for market launch in November 2010, the latest offering from American muscle bike builder Confederate Motorcycles has just been unveiled, and is to go on sale in mid-2011 for some US$45,000. The all-new naked bike from Confederate is dubbed C3 X132 Hellcat and will be built in limited numbers.

“With the new C3 Hellcat, we set out to build the toughest motorcycle ever made. This mandated absolute chassis and powertrain rigidity along with complete resistance to core fatigue,” the company says.

“To do this, we developed a new unitized powertrain casing, which is precision carved from a 400 pound block of 6061 aircraft grade aluminum. The result is superior structural integrity, weighing in at only 40 pounds. Within the new casing lives a big-boned, large diameter chassis/powertrain mounting system, informed by twenty years of Hellcat design,” Confederate adds.

The new C3 X132 Hellcat naked machine is powered by a 52-degree V-twin engine displacing 2163cc, capable of developing 197Nm of torque (145lbs-ft), while the horsepower figures are listed as “sufficient". The win cylinder Copperhead engine has been custom made by S&S Cycle and features a one-piece forged crank. The unit is paired to a five-speed transmission made in-house by Confederate.

“To deploy such massive low RPM torque, we fuse our patented powertrain system to the new motor. This proven drag racing-derived system is designed, specified, and built to maintain perfect crankshaft to output shaft alignment, irrespective of the suddenness or the volume of torque application,” the company tells us.