Even in the automotive world, there’s hardly ever smoke without a fire. Last week’s report that one of the two existing Mercedes 300 SLR Uhlenhaut Coupe had sold at a secret auction has been confirmed.
18 photos

The auction was organized by Mercedes-Benz with RM Sotheby’s and marked the first time ever that either of the two existing 1955 Mercedes 300 SLR Uhlenhaut Coupes was offered for sale. Both Red and Blue, named this way after their interior, have been with Mercedes-Benz since completion, with the automaker repeatedly saying over the years that they would never part with them. They are automotive legends, based on the W 196 R Grand Prix car and named after chief engineer and designer Rudolf Uhlenhaut. The holy grail of the automotive world, if you will – and you can say that unironically.

Such a momentous occasion was capped by a world record: Red has become the world’s most valuable car offered for sale, beating Ferrari and one of the ten most expensive items ever sold at auction.

Only select customers and handpicked Mercedes-Benz customers were invited to the auction, as one would imagine. The winning bid went to a gentleman repped by Simon Kidson, a well-respected British dealer, advisor, and car collector, who had personally lobbied with Mercedes-Benz for a full 18 months for the auction to take place.

As for what prompted Mercedes-Benz to have a change of heart about the iconic vehicle, it was all for a good cause. All the proceeds from the sale go towards establishing a worldwide Mercedes-Benz Fund, which will provide long-term educational and research scholarships for the young in areas like environmental science and decarbonization. Reports online say that Red won’t be locked up in storage and will continue to appear on occasion at events. Blue remains at the Mercedes-Benz Museum on display. 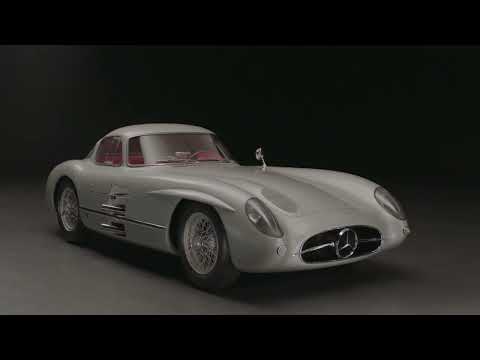