The Suzuki V-Strom 1050 is the replacement of the V-Strom 1000, which by the way is the first bike made by Suzuki to combine the design of an adventure tourer with a high-performance V-twin engine and aluminum frame from sporty models.

The letter “V” stands for the configuration of the engine, and the word “Strom” comes from the German language, meaning stream of power.
The V-Strom 1050, also called DL1050, was unveiled at EICMA in 2019 by Suzuki as a dual-sport motorcycle with a 1037cc V-twin engine. Since 2020, the V-Strom 1050 has been manufactured by Suzuki in Japan.

It has 100 hp (75 kW) at 8,000 rpm and a torque of 103 Nm (76 lb-ft) at 4,000 rpm. The V-Strom engine is almost the same as the engine used on the older models in 2013-2019, so it had to be modified to comply with EURO5 emission standards. The V-Strom engine was initially designed for the TL1000S and TL100R motorcycles, and the fuel injection is based on GSX-R models. One of the updated features is the bi-directional quick-shift system that allows up-down shifting without using the clutch.

The V-Strom 1050 has a light but strong aluminum alloy frame which makes the handling and stability very precise. The styling of the Suzuki DR-Z and Dual-sport Suzuki DR-BIG was the inspiration for the V-Strom 1050 design in 2020. It also has a traction control system with four sensitivity modes, a three-mode Drive Mode Selector, and an Easy Start System. 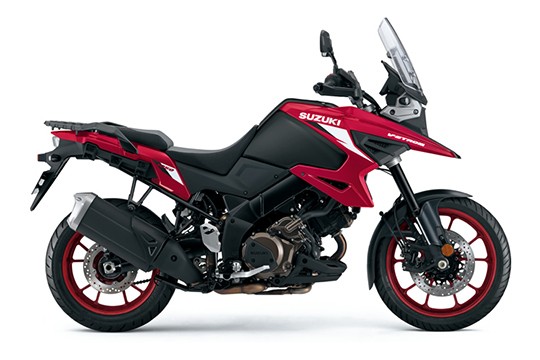