In 2022 at the Marco Simoncelli World Circuit, during the Rimini Riviera and San Marino Grand Prix, the Ducati Streetfighter V4 Lamborghini was unveiled.

The remarkable motorcycle used the technical base of 2023 Panigale V4 S, and used styling cues taken from the Lamborghini Huracán STO.

The Streetfighter V4 is driven by a 1,103cc Desmosedici Stradale engine rocking a counter-rotating shaft, desmodromic distribution with four valves per cylinder, and TwinPulse firing order, and comes with a power output of 208 hp. The braking system is from Brembo, and it uses Stylema calipers and 330 mm discs. The standard weight given by the maker of the Streetfighter V4 is 197 kg (435 lbs). The colors that wrap the bike are the same ones used on the Huracan STO, which are the Verde Citrea and Arancio Dac.

The Ducati Streetfighter V4 Lamborghini will be made in 630 + 63 units, where 630 represents the number of units that will be produced by Ducati, and 63 the limited number of bikes made especially for customers that already own a Lamborghini car. Those 63 units are called Speciale Clienti, and can be customized by the owners with the body colors and rims of the car they own.

Deliveries to the United States and Canada, where the Ducati Streetfighter V4 Lamborghini will have a starting price of $68,000 (the Lamborghini Speciale Clienti starts from $83,000), will begin in May 2023. 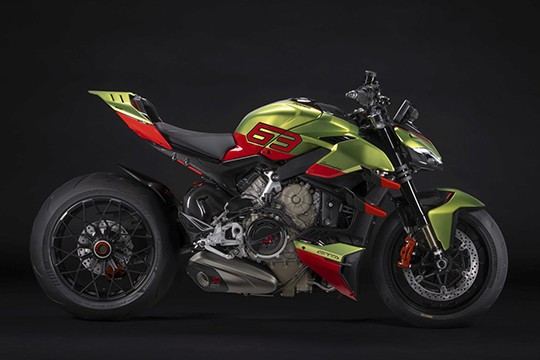